Say brother, can you spare $2500? That's what this tiny, 1" x 1.5" piece of Topps ephemera will cost you on eBay right now (auction link). That's what Ted Williams will do to a guy. 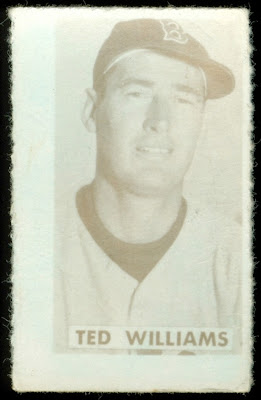 Ted's grayish haze presents poorly compared to other sets, but the "Hocus Focus" process referred to kids self-developing an initially blank image with saliva and sunlight. Spit on the card, rub it with the wrapper's inner lining to add its "developing chemical" (and spread moisture around), then a baseball player slowly appears. Given those dodgy origins, it's a minor miracle when pictures came out evenly exposed. Topps first run of self-developing cards (1948 Magic Photos #5) came out darker brown, but this Williams looks good for what it is.

Instead of reinventing the wheel, read Topps Archives excellent "Hocus Focus" research to learn more about its origins and haphazard cataloging in most collecting resources. Ted's perforated edges make him a "large" (1" x 1-5/8") example, part of a 4-card strip sold for a nickel. "Small" (7/8" x 1-7/16") versions came alone in penny packs, so don't show perforation. (Smalls are also much rarer than larges, themselves already hard-to-find.) 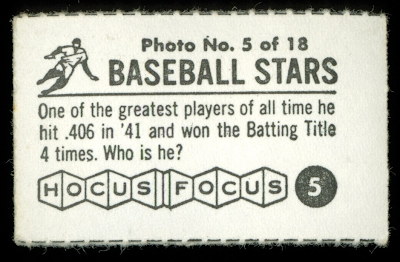 Most fans of history know this card question refers to Ted Williams. It's not one of those "see card #65 for the answer!" gimmicks used in other sets. "5 of 18" is their subset of baseball stars, one of several that comprise the full 96-card set.

It's likely I'll never obtain a Hocus Focus #5, given the rarity and star power. But should my ship come in, watch out, you vendors of tiny cardboard!

Value: Not sure who would drop $2500 on this card, but consider the gauntlet thrown down.

Fakes / reprints: While rare and expensive when sold, I doubt faking this set would pass the skepticism of advanced collectors actively interested in such Topps obscura.
Posted by Matthew Glidden