According to hearsay history, this two-line play closed the door on Cuban-born star Silvio Garcia's shot to break baseball's color barrier with Brooklyn...instead of Jackie Robinson.

Dodgers GM Branch Rickey: "Silvio, your skills stand out from high-level Cuban, Canadian, and Negro League competition. Our manager even compared you to Rogers Hornsby. We have just one more question: what would you do if a white man slapped your face or insulted you?"

Silvio Garcia: "I kill him." 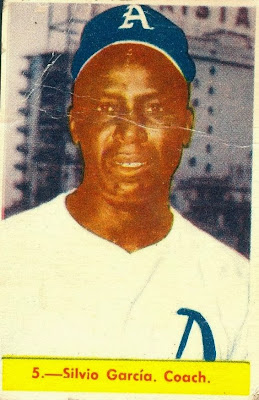 I think this oft-printed story's meant to illustrate how Rickey scouted players by character as much as skill. Regardless of truth, it also casts a Cuban-born player as reactionary and dangerous, common American sentiment following Castro's Communist revolution in 1959, so also consider the zeitgeist when people would've first written about the Dodgers' search as "history."

More likely, Brooklyn used its on-field scouting to make the final decision on candidates. By 1945, Garcia's legitimate skills were overshadowed by irregular performance and the language barrier facing many Caribbean players. Rickey wanted as sure a Sure Thing as he could find, so the search for Jackie Robinson continued.

By the time of wider integration, Garcia was 35 and no longer seen as a viable prospect, so he continued playing in other leagues--card text mentions the US, Cuba, Canada, Mexico, Venezuela, Colombia, Santo Domingo (Dominican Republic), and Puerto Rico--experience that no doubt helped his coaching. 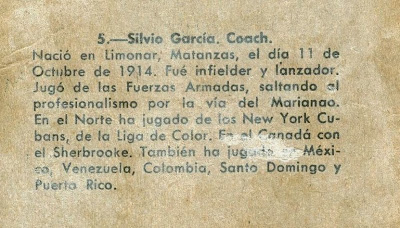 Value: Beat-up singles, often suffering back damage from album removal, sell for $15-20 on eBay. With only 40 cards and no big names, it's financially possible to complete the set, but extremely hard to find anything above low-grade.