I have a soft spot in my heart for Carlos Peña, who turns 35 today. Houston's slugging first baseman doesn't club them into the seats at the same pace he used to, but his 5 years in Tampa Bay were so good, he comfortably holds the Rays franchise HR record at 163. 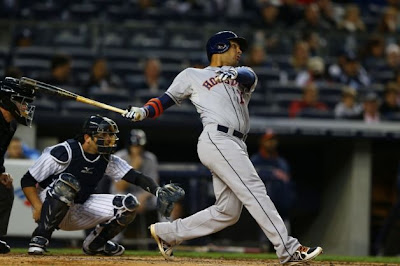 Peña's similarity scores from B-R.com turn up more of the same, big first basemen and designated hitters who regularly posted 120 OPS+ thanks to their power stroke. His top five cover a nice range of years and players, where "nice range" means "after the DH's installation in 1973." 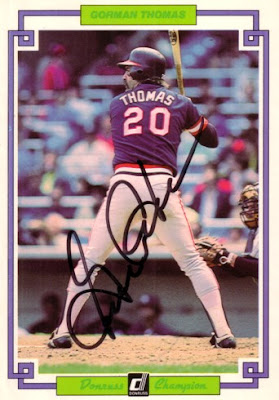 If that uniform looks odd, it's because the Brewers traded Gorman, a fan favorite, to Cleveland in mid-1983. I happened to attend one of his "Milwaukee return games" on June 26 (box score), the first time I can remember home fans cheering when a visiting player homered. (Thomas went deep off reliever Tom Tellmann in the 8th.) 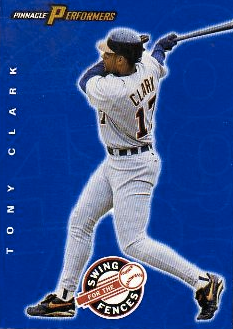 Soon after my move to Boston, the Red Sox signed Tony Clark to a $5M contract, fresh off his 2001 All-Star season in Detroit. Clark proceeded to post a 47 OPS+ and everyone in the seats hated him, hated the team, and hated the owners. He followed that folly with a handful of decent years elsewhere, so I assume Tony never felt comfortable with Boston itself, his teammates, or contract. 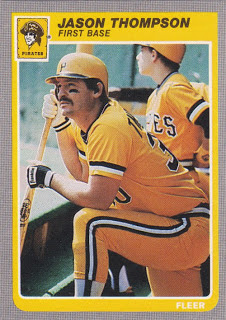 Thompson made 3 career All-Star games and struck out nowhere near the totals posted by free-swinging power guys today. Given his 120 career OPS+, I'm surprised he didn't get more opportunities after age 30. Montreal cut ties with Jason after two bad months in 1986 and that was it for his career. 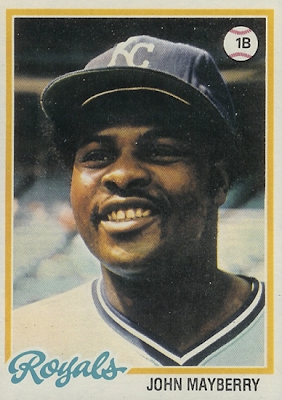 Houston drafted Mayberry with high expectations, but he never hit well in spot-duty and they unloaded him to Kansas City for Lance Clemons and Jim York, two pitchers who combined to win 9 games for the Astros. Six years, two All-Star appearances, and 143 HRs later, it's fair to say the Royals got the better end of that trade (career stats). 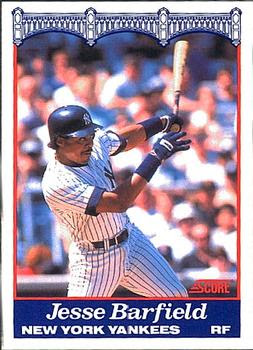 This is one of the first cards to show Jesse Barfield as a Yankee, after Toronto swapped him early in 1989 for a youthful Al Leiter. Jesse could still reach the seats in New York, but without the consistency shown earlier in Toronto. Like Jason Thompson, Barfield was finished by his early 30s, but might've stuck around longer with the surfeit of teams playing today.
Posted by Matthew Glidden