After seeing Wheaties succeed with a string of 1920s and 1930s pro endorsements (which birthed their enduring "Breakfast of Champions" slogan), Kellogg's built a competing stable of athletes and sports performers to push boxes of whole wheat cereal. Their shotgun approach is perhaps best represented by today's set, the multi-sport (and multi-species) Sports Stamps, packaged in boxes of Pep wheat cereal. 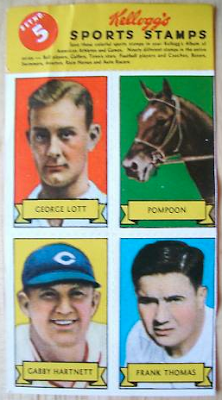 Kids could remove the yellow numbered banner, separate each stamp along perforations, and mount all 90 in a company-made album. Vintage fans might know Gabby Hartnett as a Hall of Fame catcher for the Cubs, who happened to post his last statistically great year in 1937 (career stats). So who are the other three?

This Pep promotion must've been popular, as I often see individual stamps at shows and on eBay. Full panels remain scarce, but succinctly describe the set itself. (Games that provide "endless pleasure?" Yes, please!) 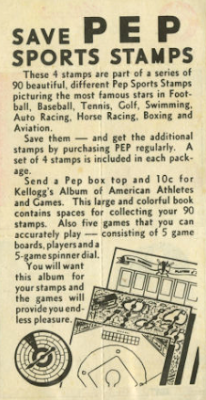 OldBaseball.com offers a hybrid, alphabetizing the players but including their panel number. 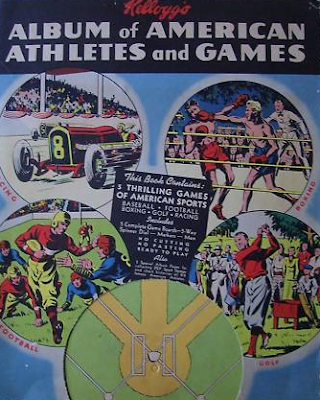 No idea about those criss-cross lines across home plate. Anyone know if that's really how fields looked in the 1930s and what the lines in foul ground demarcated?

Inside, one page held all 18 baseballers. 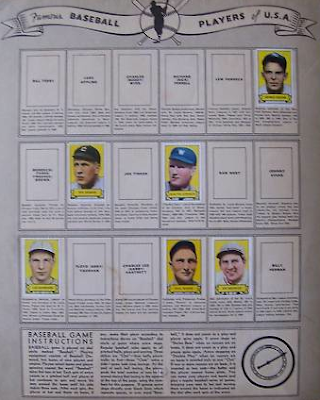 Value: Low-grade complete panels cost $20-$50, depending on players. Individual panels come cheap and I'd pay a few dollars at most. It'd be fun to find a complete album, but they might only turn up in auctions.