Not sure why I'm a fan of goofy blond curls on baseball players. Was it the post-disco zeitgeist? The Fidrych Effect? Anyway, add Brian Allard to that list of xanthic fashionistas. 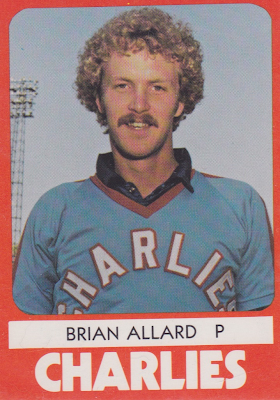 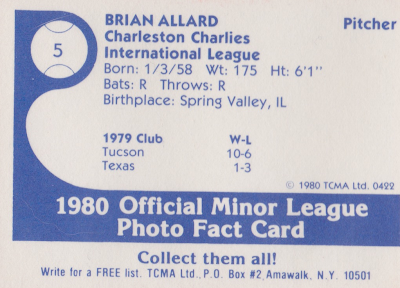 My 9 year-old self remembers Brian Allard for his 1981 stint in a Mariners uniform (game logs), which followed this big trade for Texas slugger Richie Zisk.


Zisk stepped into the DH role vacated by 39 year-old Horton, who Texas ultimately released before the 1981 season. Rick Honeycutt nabbed an ERA crown as a starter in 1982, then evolved into a Tony LaRussa relief specialist for Oakland and St. Louis.

Speaking of roster moves, what else did Seattle's do with their side of the trade, other than Steve Finch (who never reached the bigs)?

June 27, 1984:  Jerry Gleaton traded by the Seattle Mariners with Gene Nelson to the Chicago White Sox for Salome Barojas.


At least Seattle got 3 solid (121 OPS+) seasons from Zisk, who retired following his 1985 release. A 1980 article about the trade noted a few other deals (both real and potential) I'd forgotten about. Fred Lynn almost swapped for Ron Guidry? Whitey Herzog acquiring future HOF relievers Bruce Sutter and Rollie Fingers and then flipping Fingers to MIL? That's a busy off-season.

Here's another look at that Seattle Mariners trading acumen.


Yup, trading a dude for himself. Mariners fever! Catch it!

Fakes / reprints: TCMA reprinted several of their 1980 teams for "collectors kits" in the late 80s. The reprints have black ink backs instead of blue.
Posted by Matthew Glidden