As noted by Jeff Passan, Werth's blast helped in two ways, both distracting Washington fans from fellow OF Bryce Harper's 1-for-18 slump and guaranteeing all four division series would go the 5-game distance. SO MUCH BASEBALL, PEOPLE. 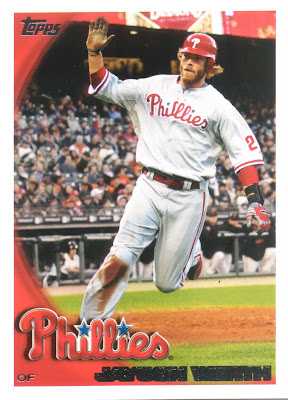 Hot on the heels of Raul Ibanez's heroics for New York, Werth makes it two former Phillies doing good work in the type collection. This particular card's one of the "bonus" subsets, which BaseballCardpedia lays out in their 2010 Topps Factory Sets entry and includes these Phillies, all prefixed PHI.

As Phillie fans can unfortunately confirm, there's no sure thing in baseball. And no crying, either!
Posted by Matthew Glidden