Congratulations to Ryan Vogelsong in pitching San Francisco to a 6-1 victory and forcing game 7 in the 2012 NLCS. Defensive miscues behind opposing starter Chris Carpenter put the Cardinals in a hole early and Vogelsong pitched like he belonged on this League Leader type card. 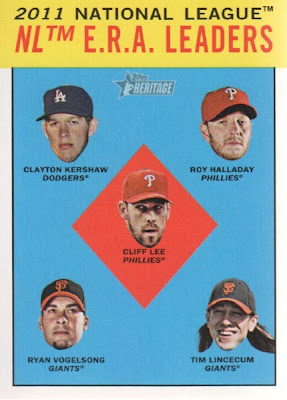 Heritage sets match what Topps used 59 years ago, so you're looking at primary color backgrounds and floating head designs first seen in 1963, this time with lots of planned variations, subsets, and inserts (full checklist at SportscardRadio). The original version included guys named Koufax, Drysdale, and Gibson. 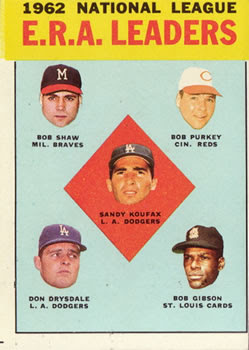 The 2012 card back lists all 49 pitchers to qualify for the 2011 ERA title by throwing 1 inning per team game played. Pittsburgh teammates Jeff Karstens (3.38 ERA) and Paul Maholm (3.66 ERA) both tossed 162.1 innings to barely make the cutoff. At the other end, our aforementioned Chris Carpenter led NL hurlers with 237.1 innings, despite winning only 11 games and posting a slightly-above-average 108 ERA+. (Halladay and Kershaw turned their 233+ innings of work into 19 and 21 wins, respectively.) 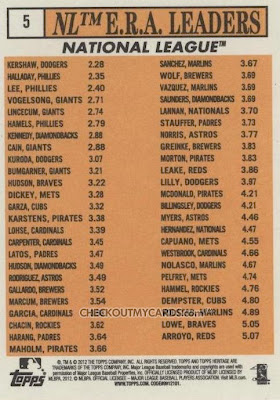 If the Giants win another World Series, that Lincecum thing will drive SABR people to drink.
Posted by Matthew Glidden