Ready for some baseball detective work? Let's dive into a moment in time captured by Massachusetts-based photographer Leslie Jones, who spent decades building a huge catalog of Fenway Park images that now live physically in the Boston Public Library archives and online as the Leslie Jones Collection. For vintage fans, this is just a peek into that treasure trove of classic players--and one filled with unknowns. 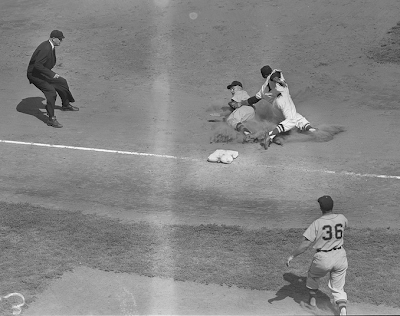 Many baseball photos show readily recognizable stars, but this shot's a mystery beyond the teams at play (Red Sox hosting Tigers). Archive notes for the larger original photo labeled everyone in this shot as "unknown," a level of intellectual rigor I'm unsatisfied with. Can we do any better? I think there's enough context to pin it down.

I started with an assist from SABR, who corrected the archive's "August 1955" date based the presence of Detroit coach #36.


"[D]ate from information provided by Leslie Jones or the Boston Public Library on the negative or negative sleeve...research by the Society for American Baseball Research in 2010-2012 disputes the date of this image. They suggest that, because the opposing team is the Detroit Tigers who had a coach wearing #36 from 1950 to 1954, the image was more likely created sometime during those years."

So which of those four is it? The sharp eyes of avid Detroit fans at OldBaseball.com threw their weight of opinion behind Harvey Kuenn, 10-time All-Star and future manager of Milwaukee's only World Series team. That makes our game the last candidate, August 25, 1954. Here's an updated caption for the photo itself. 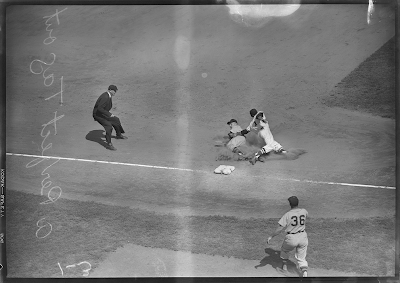 "Third base coach Johnny Hopp (#36) looks on as Grady Hatton (#1) tags out larceny-minded Tiger shortstop Harvey Kuenn (#7), completing a strike 'em out, throw 'em out double-play and squelching Detroit's 3rd-inning threat. At left, umpire Eddie Rommel prepares to make the call. The Red Sox tallied 5 in the 5th and tamed the Bengals 5-3."

I like the (reverse) scripted note on Leslie's photo, too: "A perfect tag out."

Mystery solved! Check out the archive and let me know if you find other images worth diving into.
Posted by Matthew Glidden

I covered three of the Leslie Jones photos last year. 1, 2, and 3. I need to visit the site and give it another go.

Thanks and good to be reminded of your earlier Leslie Jones investigative posts--surprised to see that I already commented on one back at its original posting. :-)