I assigned all six names to a die and rolled for the winner.

The die came up 3, so congrats to Mad Guru and thanks for his stories about Minnesota's custom usher shoes and his personal significance of scoring the 1987 World Series.

"When I interned at the Hall of Fame, there was a fellow there who was a diehard Twins fan. He was in the summer after his junior year of college and had been an usher for the Twins for years. The Twins apparently give their ushers white sneakers with the Twins logo on the side. The Hall didn't have usher shoes in their collection and they asked him if he'd donate his shoes at the end of his internship which he did.

Also, the first ballgame I ever scored using the Project Scoresheet methodology was a 1987 Twins World Series game which caused my interest in baseball to explode a gazillionfold. One of those things where I wonder how my life would have turned out had I not done it." 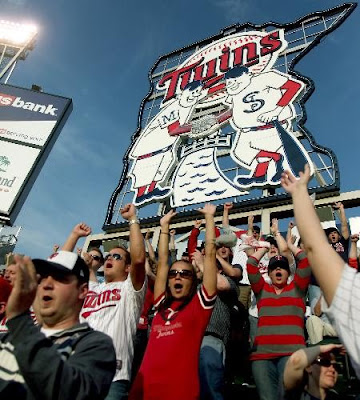 Bring on the regular season!
Posted by Matthew Glidden