Baseball-Reference.com recently achieved a major milestone for stats fans by publishing Negro League data for a big chunk of the pre-integration era, 1920-1948. It comes with caveats and significant gaps in history, but represents a big step toward recognizing so many players otherwise missed by baseball history. 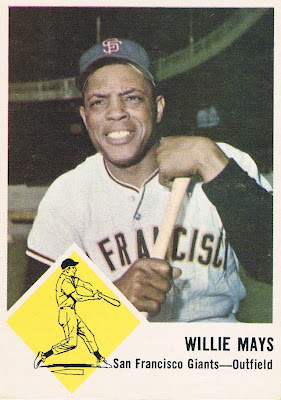 One gentleman who started his pro career in Birmingham for the Negro League: Willie Mays. So far, they've uncovered partial 1948 batting stats for the 17 year-old Say Hey Kid, whose Black Barons competed against five other teams spread loosely across the Midwest and South.

Mays didn't tear up the 1948 league based on the numbers we have, but few teenagers do and Willie matured plenty fast for the majors. By his early 20s, the Mays award shelf already contained ROY (1951) and MVP (1954) awards.


After publishing hand-tinted sets of retired players in 1960 (set profile) and 1961 (set profile), Fleer took on the Topps baseball monopoly more directly with this full-color issue of active players. 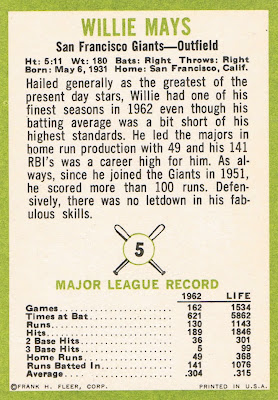 To Fleer's credit, they made some interesting design choices instead of mimicking Topps. 1963 is the only time I've seen a centered card number and the text-centric back with limited stats reminds me of early 1950s Bowman sets. (Those green borders do chip easily, making high-grade sets hard to build.)


Fleer tried to dodge legal hassles by including a cookie, gambling that Topps' exclusive right to sell gum with cards would survive a courtroom challenge. It unfortunately did not, so just one series of 66 cards reached the market. Its clean look remains popular with collectors and the stars include Mays, Clemente, and Koufax.

The "cherry-flavored" cookie, by the way, proved dry, tasteless, and a hazard to any cards it made contact with. Not sure if that factored in the legal decision, but I bet few kids missed it when it was gone.

Value: Low-grade Mays cards can be had for $20, if you're patient. The rare Joe Adcock and checklist cards prove hard-to-find and thus unexpectedly expensive. Beat-up singles cost a dollar or less.

Fakes / reprints: Haven't seen any direct reprints, but uncut sheets have appeared at auctions and someone could fake singles based on one of them.
Posted by Matthew Glidden