Today's 10-card set popped up in a recent eBay search, and though it's not baseball-specific, I liked its art enough to snapshot the two 5-card strips that comprise the whole thing. 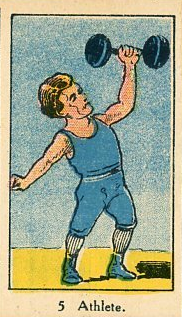 This simple, woodblock style reminds me of turn-of-the-century book engravings, with its childlike proportions and primary colorization. Like most such sets, kids bought them in vertical or horizontal strips from carnival vending machines for a penny or nickel. 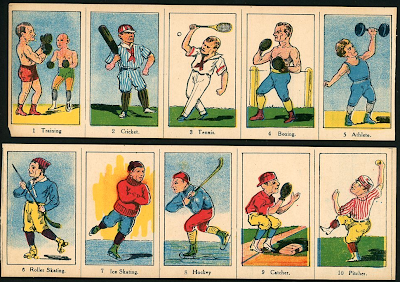 Finding this full set scan made it easy to checklist.

Old Cardboard's W542 set profile calls out its similarity to the unnumbered 1919 W552 set, which Mayfair Novelty printed not on strips, but as a 3x4 sheet. 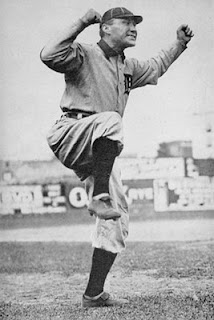 Hughie appears in vintage sets from time-to-time and often in the same pose, even if transitioned back to "batting."


Jennings turned his EE-YAH! yell into a catchphrase, similar to the Marines "ooh-rah" of today, and you can read his biography under that same title.

Fakes / reprints: Haven't seen any in the marketplace. I think they're too unknown (and unpopular) to be worth faking.
Posted by Matthew Glidden