Not sure why they snapped this photo next to a driveway and tennis court. Perhaps Holyoke, Massachusetts, packs all of their sports surfaces onto a single city block. 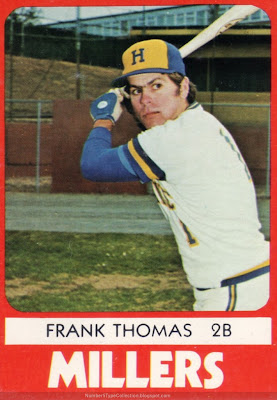 Card front
Today's guest is only one of many gents named Frank Thomas to put on a pair of spikes. The Big Hurt is our generation's best-known, but a 3-time All-Star with the same name hit 286 homers between 1951 and 1966. (That older Frank signs his cards as "The Original One.") 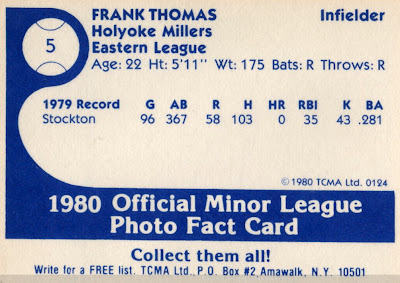 Value: 1980 TCMA singles costs a dollar or two. Do dealers charge extra for Frank's intense expression? No, that should come free.

Fakes / reprints: I've never seen a faked 1980 TCMA card in the market and don't see a wave of them starting up anytime soon.
Posted by Matthew Glidden