Here's a stately pose by the man with two first names, southpaw Mike Chris. I bet the ladies swooned for that cleft chin and those angular features! 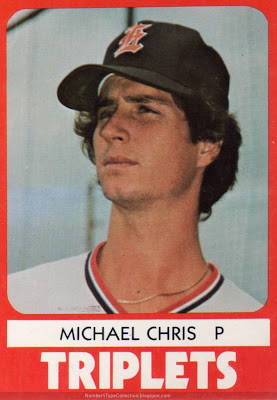 Card front
Mr. Chris spent almost 10 years in pro ball, split between 6 minor league teams and 2 more in the bigs. Mike debuted with Detroit at mid-season in 1979 and made 13 appearances, winning 3 times despite a 6.92 ERA. His finest performance was probably this 3-1 win over Tommy John and the Yankees on Sept 9th. 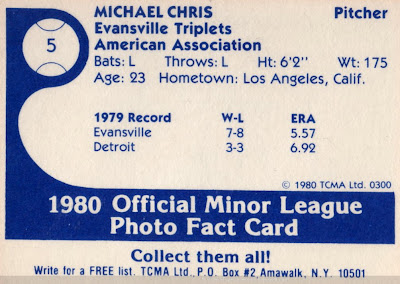 Card back
Evansville's Triplets played at Bosse Field, America's oldest minor league baseball stadium. Only Fenway Park and Wrigley Field have seen longer continuous use! (The movie A League of Their Own used its classic lines for several scenes.)