As of July 2010, Jamie Moyer's midway through his 27th pro season, mixing 10 minor league squads with another 7 in the majors. Taking the field day-in-and-out for 20+ years puts him in rare company, a clan of mostly pitchers. Most folks know its Hall of Famers, like Nolan Ryan and Satchel Paige. Another of them? Today's guest, the extremely well-traveled Elmer Singleton.


This vintage rookie card--and what appears to be a paste-on ball cap--marked Elmer's second stop in the majors. He debuted with Boston in 1945, but moved to Pittsburgh by the time Bowman resumed post-war card production in 1948. (Career stats at Baseball-Reference.com.) 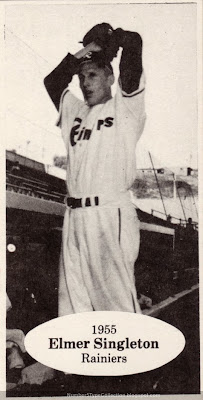 More critical to today's set profile, Singleton spent 20 years in the minor leagues, including 12 in the Pacific Coast League. Along the way, he picked up the colorful nickname "Smoky." Pitchers often get called "smoke" if they can bring the heat, but I suspect Elmer got it for some other reason. (Not sure why 1949 Bowman went with "Bert," since it's actually his first name.)

UPDATE: I'm wrong! Smoky's granddaughter confirmed on this post that his fastball earned the nickname. Great to learn it from an original source. 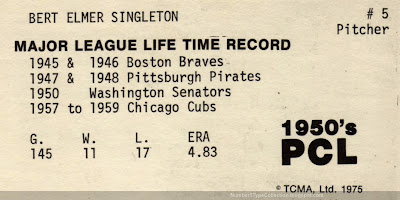 Value: Cards from this obscure, 18-card set shows up every so often on eBay. I probably overpaid on this #5 at $15, but sometimes rarity trumps financial pragmatism.

Fakes / reprints: While it'd be easy enough to reprint one of these black-and-white cards, famous players are at highest risk of counterfeiting. I doubt many, if any, fakes exist.
Posted by Matthew Glidden

He was called Smokey as a nod to his farm league fast ball. “Bert” was his legal first name, and used early in his career~ he was always called Elmer, & his ID was under Elmer, his middle name.
Co~ His GrandDaughter

Thanks for confirming, that's great to learn firsthand! I've updated the article and, as someone who went by my middle name for a long time, Bert vs. Elmer's understandable. :-)