Since I'm nominally on vacation in the southwest, let's check out a local from the erstwhile Phoenix Giants and still-very-much-alive Circle K Stores, America's second-largest chain of convenience stores. (They trail only 7-11, who also occasionally publish baseball sets.) 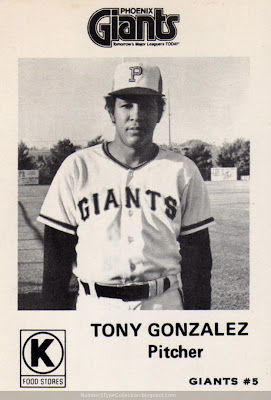 To my Boston-based eye, this gentleman looks a lot like Manny Ramirez, at least in his short hair days. His AAA franchise represented San Francisco in the Pacific Coast League from 1958 to 1997, first as the Giants and later redubbed the Firebirds. (VROOM!) 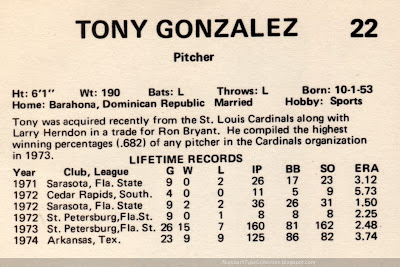 Tony hoisted some sharp numbers for St. Pete in 1973, but had middling success beyond. He went 5-9 for Phoenix in 1975 and lasted just 2 more years in pro ball before moving on to other pursuits (career stats at Baseball-Reference.com). Despite throwing 4 years at the AAA level for SF and Cleveland, he never made it to the bigs.

Value: Like most minor leaguers, Tony's cards cost a few dollars on eBay or Beckett Marketplace.

Fakes / reprints: I doubt anyone would fake a minor league set unless it contained eventual major league stars and that didn't happen for Tony.
Posted by Matthew Glidden