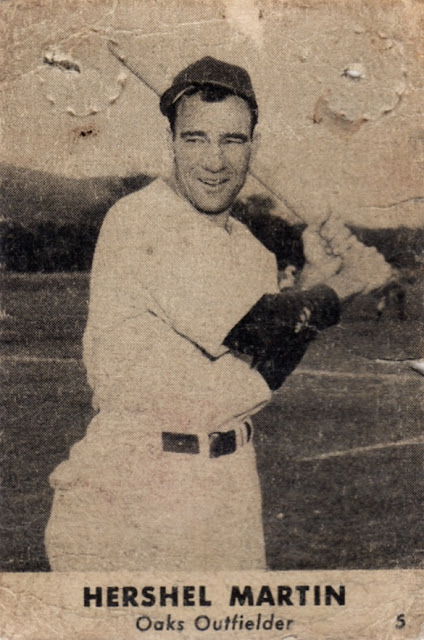 Today, we sometimes tag the All-Star game as a piano recital of top performers for each league, where everyone gets a turn at bat and polite applause. In 1938, though, all but 2 starters played a full 9 innings. Gehrig pinch-hit (for 3B Buddy Lewis) and took over at 1B in the 5th, but rather than bow out, Jimmie Foxx simply moved over defensively to 3rd. Backup third-sacker (and Lou's NYY teammate) Red Rolfe stayed in the dugout.

While a good hitter in 1945, and still able to leg out several triples, the late-30s Martin soon found himself unable to compete in the Yankee outfield. Joe DiMaggio's return from the war keyed a replacement of all three starting positions, something seen in many post-war ballparks. Hersh instead caught on with the PCL Oakland Oaks, a AAA team performing well under eventual HOFer Casey Stengel. (See 1947's Oaks #5, Ray Hamrick, for more detail on the "Old Perfessor.") 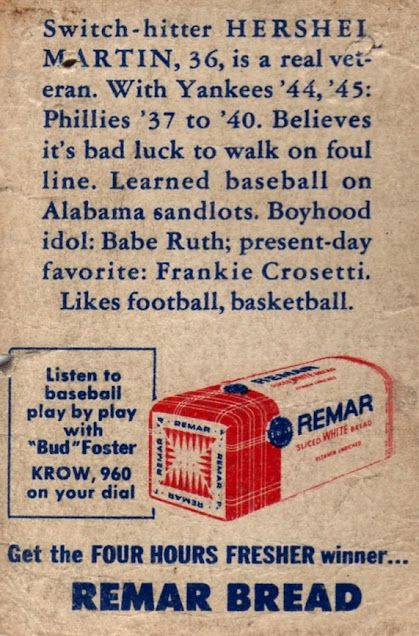 Hersh's card resembles three other Oakland Oaks issues from the same era. Local stores sponsored 4 total for the popular team, including 2 in 1947. Smith's made men's clothing.

Check out the 1946 Remar set at TCDB.com for some nice front and back scans. Curiously, it contains 5 unnumbered cards; numbered versions start with Martin and continue to #22, Bo Palica.
Value: As a minor league set, individual cards don't cost a ton, but also aren't too easy to find. $10 and patience should net you a low-grade common.
Fakes / reprints: I've seen modern reprints of Remar's original, as well as retro sets that repurpose its base design with different players; see my 1948 Sommer & Kauffman post for an example. Watch out for cards on thick stock or with strong gloss. Originals from this set use thinner stock than typical cards today and almost gloss-free paper.
Posted by Matthew Glidden