"Regional issues" remain an interesting, and often elusive, aspect of type collecting. Most often, regional sets start with a local business trying to expand in their market. They'd license some photos of the local players, print a modest number of sets, and add those baseball players to, for example, packs of lunch meat or post-purchase shopping bags. Today's set hails from the SF-based Sommer & Kaufmann boy's clothing store. We can assume stores gave away these cards or team sets with in-store purchases, or at least dangled them as freebies to encourage kids to shop there. 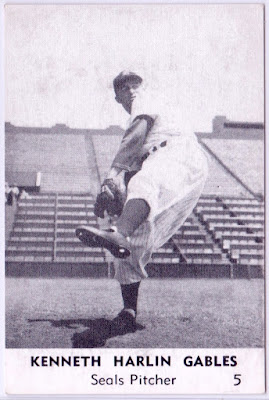 The Seals were SF's Pacific Coast League team and this black & white design closely resembles a handful of other late 40s SF Bay area sets. I suspect one local print shop arranged underwriting for all six of them. (Links go to my #5 type profiles for each set.)

Remar cards remain the easiest to find in today's market and Smith's not much harder. You'll grow old and die waiting for specific Sommer & Kaufmann singles to turn up, though. Be ready to spend $$$ on them when they do. 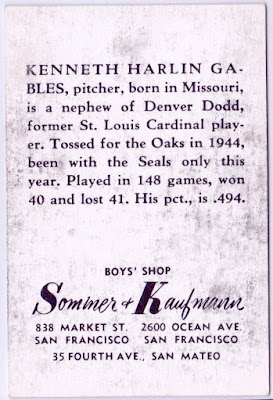 Note those stats are career totals. Kenneth did not pitch in 148 games with 81 decisions in just the previous season, but rather in 1942-47 combined (career stats). Going 40-41 in one year would be a scary amount of overuse.

My favorite regional issue? That's the 1954 Johnston's Cookies #5 of Hank Aaron (set profile), which also happen to be a Hammerin' Hank rookie card.

Fakes / reprints: Back in the 1970s, one or more complete set counterfeits entered the market. The real set's so rare, you might need a handful of them to evaluate and distinguish in person, and the counterfeits have now been around long enough to age on their own. I caution people against buying singles without good comparables. Read "The fake-card scandal of 1972" on Net54.com for more info and discussion of a range of 1970s counterfeits.


At least one modern direct-to-collectors set replicates this look-and-feel under the name "1950 Sommer & Kaufmann." There was no vintage 1950 set. Longtime collector and publisher Carl Aldana created the "1950" set in 2015 as a modern retro version, priced at a few dollars each.
Posted by Matthew Glidden