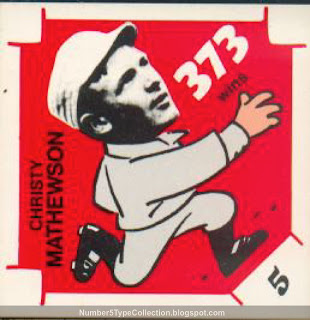 
Credit baseball artist Robert Laughlin for this interestingly canted set that affixed photo craniums to hand-drawn bodies. It hearkens back to Goudey's 1938 set design, which many collectors call the "Heads Up" set. (As a long-time fan and font of card knowledge, I'm sure that's intentional on his part.)

Every player in this 30-card set (full checklist here) reached one of three hallowed marks.


In 1980, only a select few players qualified for that elite list and this issue presents them on glossy, superwhite card stock reminiscent of Upper Deck's early work.

As blogged by SCD "big book" editor Bob Lemke on July 20, 2009, this set was curiously reprinted sometime after the original release. We can hope Mr. Laughlin himself did the work to satisfy a need for more orders--otherwise, why go to the trouble for an oddball release with fairly low current demand? Perhaps we all live in Glenn Hubbard's world, where some things have no explanation.
Posted by Matthew Glidden

This seems like it might be a really worthwhile set. I'll definitely be checking it out. Great find!

Glad you liked the set. It contains so many HOFers, the price could be higher. Unfortunately, the unusual size and orientation's kind of a pain to store or display; 4-count pages are the rule.