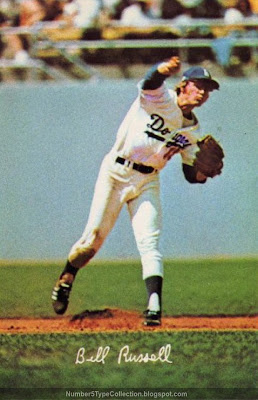 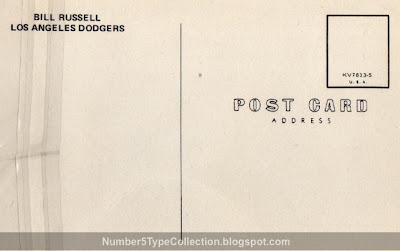 The back's as blank as any postcard should be, aside from the address space and vertical divider. Can you spot the #5 designation? It's waaay up in the stamp square as a "-5" suffix. Beggars can't be choosers--a type card by any other name would fill the 4-count sheet just as well.
Posted by Matthew Glidden

Holy smokes, there aren't many cards that you show that I actually have. Here's one of them.

Hmm. When someone ordered a team set, the Dodgers must've mixed older postcards with newer ones, because I checked the numbers on the back from my set, and according to your breakdown, some are from '75, some from '77, some from '79, etc. I have a Valenzuela one, which only has D-10 listed on the back. That must be from '81 or so.