In the age of excellent card photography, this big glasses, helmet-less, hunchback composition of Mr. Brinkman looks like a red-headed stepcard. 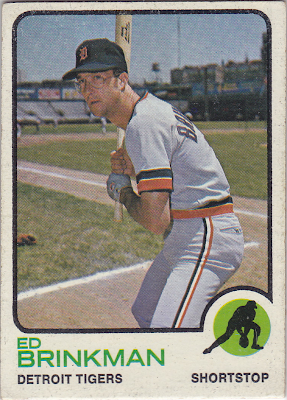 The cameraman probably caught Ed awaiting batting practice and surprised him with a head-high paparazzi fastball. My short play Waiting for Brinkman captures the moment.

Ed Brinkman: "WHAT?" [Ed spins and hunkers down, ready to protect himself from a bullet or shaving cream pie.]

This might be Ed's lamest card. 1964's "Ennui" Brinkman comes close, but at least we know what he actually looks like. 1973's version looks like generic 70s Detroit Tiger. 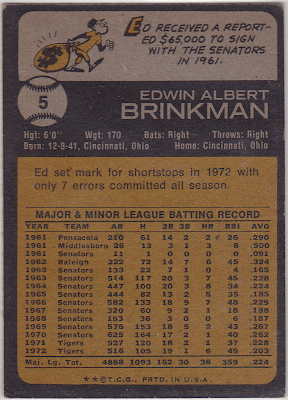 As an everyday player and fan favorite for the 1960s Senators, Ed set many franchise records with the glove and even placed highly with the stick due to longevity. Fielding prowess led to some MVP votes in 1973 despite a .205 (!) batting average. His last hurrah came in 153 games with the 1974 Tigers, where he produced a career-high 14 homers and 54 RBIs.

Ed Brinkman was a high school teammate of Pete Rose at Western Hills High School. I think Eddie was a grade behind Pete but made the majors a year before Pete.

Interesting! Wonder what Pete would've done as a Senator or Tiger, like Ed.