One could argue there's not much to say about this shiny (but otherwise unremarkable) Topps insert set from the mid-1960s. Another card blog I know, Things Done to Cards, recently profiled the important elements. Smaller size than typical, 72-member checklist, usually seen in gold foil but sometimes in silver, etcetera. 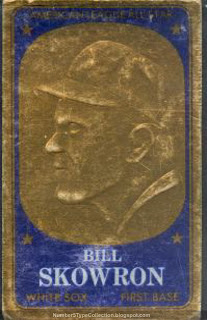 To add at least a smidge of original content, consider the set's similarity to another popular hobby: coin collecting. Its sensitivity to rarity, condition, and context parallels ours in the baseball world, but some objects of desire double as actual money. (Valueless fiat currencies, such as the Confederate Dollar, trade like cards on the collecting market.)

As coins circulate, they wear much like Mr. Skowron's profile shows here. Raised features smooth out slightly, details fade into the background, and flat elements abrade or scratch. Surface wear kills the value for most cards, since image is everything. Coins better withstand life's vicissitudes, made as they are for handling and exchange.

It's interesting our hobby escalates a paper image over metal coins, which usually turn up only as oddball issues. Aluminum, nickel, and steel all hold higher innate values, but something the size of a quarter doesn't capture baseball's dynamic nature. The ball can move hundreds of feet in just a few seconds, whip around the base paths, or become a treasured souvenir. Something about a photo card captures that possibility and I feel that's the failing here. This embossed set stultifies the players into busts appropriate for a museum. They go stiff and dumb when we expect and anticipate action. Great sets turn on creative design that opens up the holder's mind or captures a kinetic moment. Ungreat sets pin things to a single outcome or point of view. I'd rather have the potential.
Posted by Spike Glidden