This Frank Robinson newspaper “card” comes from way back in 1970, two years before my own name appeared in the birth section. His career still in full swing, Frank both started for the 1970 AL All-Star team and won the series for the Orioles over his previous team, the Cincinnati Reds. As good as he was then, Frank's gaudy numbers from the pitching-friendly 60s could've been even bigger under the fitness and power-first practices of today's game.


These “bubble-gumless cards” came from a Dayton newspaper, who created that year's set to support Cincinnati's hosting of the 1970 All-Star Game. The paper printed a set of 160 players and covered every corner of the country, not just Orioles and Reds.

After Cincinnati won the NL pennant in 1970, Dayton reran a similar (but not identical) checklist for 1971, adding 1970 season stats, alternate photos, and swapping some players who changed teams or retired. This created a maddening number of variations for collectors who like to work on such challenges. Good thing I'm happy with just a type card!


The (currently inactive) blog Uncatalogued Baseball Cards checklisted both years of "cards" in their entry for Dayton Daily News. See that link for a downloadable PDF of the full checklist. Note that checklist says #196 is "unknown," but it's since been ID'd as Bob Matheson in a Dayton set variations thread from Net54.

Johnny Bench is one of a handful with three variations: his "2b" version adds "All-Star" and red tinting to recognize his hometown appearance in the 1970 All-Star game at Cincinnati's Riverfront Park.


While this set's technically "catalogued" in the SCD annual vintage guide, no less than erstwhile SCD editor Bob Lemke agreed these bits of newspaper could be dropped in future editions, if space in the annual guide became a premium. This forum thread on Net54 debated if newspaper cutouts meet a minimum bar for "cards" and could thus be excluded. Decades later, debates about our hobby remain with us!
Update: Frank Robinson picked up this variation one year later with a new photo and fresh stats. Thanks to another collector who laid out their dates and differences. 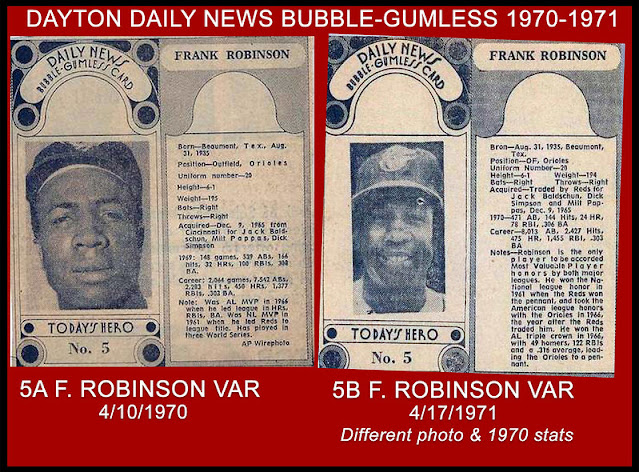 Value: An oddball dealer at the National Sports Card Collectors Show of 2007 sold me this #5 for $10. The red ink pen (somewhat visible at the lower right) notes Frank was “Triple Crown Winner in 1966," which no doubt knocked a little off the final price.
Fakes/reprints: It would be easy to copy and reprint these newspaper clippings, so its saving grace are the scant awareness and low demand for this kind of set. Type cards should cost you a few bucks at most, unless you want its biggest names.
Posted by Spike Glidden