Early Philadelphia catcher Red Dooin couldn't hit much, but understood pitchers well enough to parlay limited physical talents into a 15-year career, 5 of them as player-manager for the Phillies. He debuted on the dugout steps in 1910, the same year this caramel set hit candy stores. 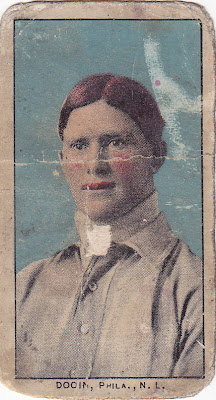 Many credit Red with the emergence of HOFer Grover Cleveland Alexander, a diamond discovery for any scout or coach. I credit Philadelphia Caramel with hand-tinting Red's hair for their set.

Tobacco companies collectively exited the baseball card market in the early 20th century, just as commercial candy production became viable. These Philadelphia Caramels, also known by their E96 American Card Catalog number, feature a tinted portrait on the front and 30-player checklist on the back. Although there's no prominent "number 5," the card itself catalogs Red that way. 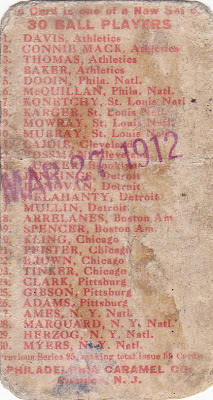 I'm not sure where the March 27, 1912 stamp came from, but one possibility is a stock marking. Stores often marked merchandise upon arrival, and earlier issues sometimes show a date in pencil. However, most E96 cards came in candy packages, so it's more likely someone wanted to stamp things and tested the ink on some nearby paper--their card of Mr. Dooin.

Value: Based on completed eBay auctions, low grade E96s go for $25-50. (Some dealers price graded singles $200 and up, where they go unsold, week after week; eBay's an odd marketplace these days.)

Fakes / reprints: Reprints exist for the whole set and that goes double for the big-name players. (While not a star himself, it's possible someone reprinted this Dooin and went to great lengths to conceal that fact by trashing the card itself; it's a common strategy on fakes of high-value Ruths and Cobbs.)
Posted by Spike Glidden