Mr. Herrera looks pleased as rum punch to take the field for the Phillies, despite 1960's last place finish and 59-95 record. The Leaf set's high-contrast black-and-white compliments his Cuban skin and the backlight halo makes him positively beatific. You need this kind of attitude on last place teams, given how quickly the losing can grind players down. 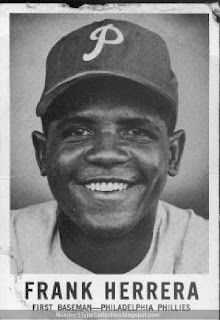 Pancho played almost every game at first base in 1960 and hit productively enough to finish runner-up in the ROY voting. He also posted 17 appearances at second base, something rare by today's standards. An overall fielding percentage of .988 reveals real limitations with the glove, but his stick led the team's regulars in 2B, 3B, HRs, RBIs and only Tony Gonzalez slugged better as a regular player (but with half the ABs).

It's evident Herrera hit like a classic first-baseman. Perhaps unfortunately for his career, he struck out like the modern version. Many now think that 136 Ks don't matter much when you excel at hitting for power and are otherwise productive. Someone who did so in previous generations, unfortunately, needed to be a star to escape the "swing at anything" stigma. Setting the major league record for Ks (as he did) in your rookie season makes for a challenging first impression.

Considering his two years of above-average production, it intrigues me that Pancho never appeared in a game after 1961. Herrera spent 1962 at Triple-A Buffalo and the Phillies eventually traded him to Pittsburgh as part of a deal for a fading Don Hoak. Although only 29 in 1963, the Pirates apparently couldn't find a position for him and that was, as they say, "it." Occasional appearances at Philly old-timer games tell the remainder of his story in uniform.
Posted by Spike Glidden

I remember Pancho. 1960 Phils was my frst team, and have been my team since.