Hank Aaron, Jim "Toy Cannon" Wynn, Ron Santo, and Willie McCovey? This who's-who of late-60s power hitters holds a special place in my heart as the last vintage Venezuelan on my #5 wantlist. It's got tape stains, missing paper, and creases, but you can't tell me it ain't beautiful. 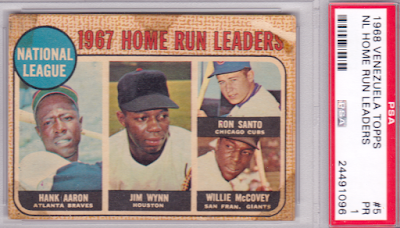 It was such a pitching-friendly era, these guys were the only four to hit 30+ homers in the National League that year. Most credit tall pitcher's mounds with those late-60s depressed power numbers, enough that 1969 saw a lowering of the mound to 10", the height still used today. More details on the mound's history at "Why are pitcher's mounds higher than the rest of the baseball field?" 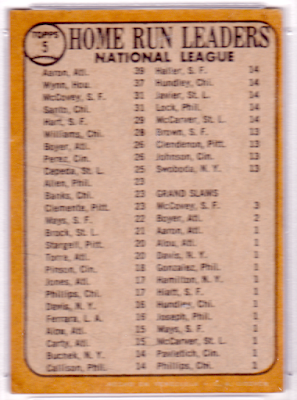 Most surprising player in a high spot on that HR leaders list? HOF speedster Lou Brock, who managed a career-best 21 big flies that year, even as he led the NL with 52 steals.

Topps executives kept tabs on the Central & South American baseball market throughout the 50s and 60s, so I assume their periodic licensing to local printers like Lithoven made financial sense, especially as more native sons entered the MLB, spurring more national interest. Their 1962 set, for example, included Venezuelan-only cards for Elio Chacon (see my 1962 set profile) and Luis Aparicio (below). 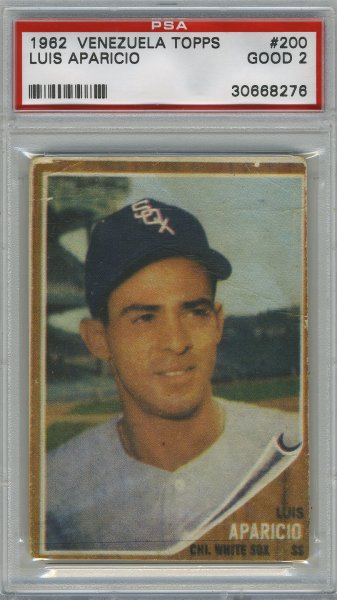 The 1968 Venezuelan set tops out at 370 cards, a few hundred less than America's version, with Mickey Mantle, Nolan Ryan (RC), and Johnny Bench (RC) being the biggest names.

The Topps Archives article El Fin de Invierno includes more scans and info about this final Topps parallel, but the short story is that no Venezuelan set attempted the match USA's card size and presentation after 1968. A few 1970s sets copied American player fronts, but as knock-offs rather than the real thing.

One question never answered about Topps Venezuelan sets is why they skipped years through the 1960s. Rumors persist--with me as a willing participant--that many Topps unsold packs found their way to Caracas, Venezuela candy stores in the years between their licensed printings of 1960-62-64-66-68. Reselling leftovers to a baseball-hungry country seems a lot more likely than dumping stock into a nearby waterway, as the story of 1952's high numbers goes (here's a version with Sy Berger commentary). We might never know for sure, as few Venezuelan collections survived to the present day.

Value: After failing to win an earlier #5 at auction for $120, I pulled the trigger on a Buy It Now listing for the same price. That seems high in retrospect for its low grade, but anything in nice shape would sell for many times that.

Fakes / reprints: Venezuelan are in demand from speciality collectors and used lower-quality materials, so are at higher risk of counterfeiting than USA-made cards. Try to buy type cards from experienced foreign collectors or dealers and get to know the different back colors and other printing peccadilloes so you're adding the right thing to your collection.
Posted by Matthew Glidden

Very cool pick up. I gave the pitching ldrs card from that set. Slowly piecing together some of the Redsox sets.

Yes, planning to be at Shiners show on Saturday!