Today (August 23) in 1914, over 35,000 British troops encountered Germany's 1st army in Belgium, following similar engagements by France earlier that week. It was Britain's first continental battle of WWI, and while at numerical disadvantage, their forces withstood extended artillery bombardment before choosing retreat over potential envelopment and capture. The German army proceeded into Belgium, pushing Allied forces back to the Marne, where...(Wikipedia can take it from here). 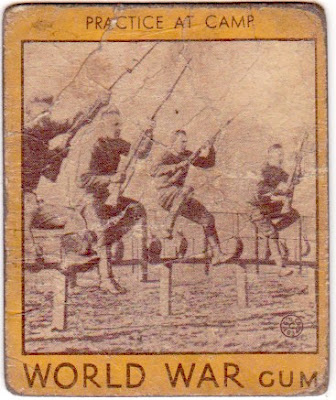 I looked up this engagement (the Battle of Mons) thanks to another of Goudey's 1933 sets, World War Gum. It's largely what you see, as a set of 96 black-and-white photos from a war almost 20 years old by that point. Goudey released it as a pair of 48-card series, likely using sales of the first (and other products, like my favorite: Big League Gum) to finance printing of the second series, later that year.


The second series used red borders and enlarged its photo space with a "World War Gum" stamp instead of the bottom edge tagline. 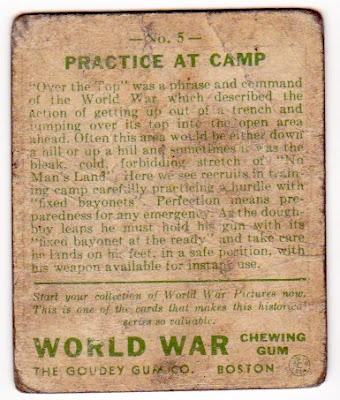 While WWI forces weren't immobile, the European ground war went slowly, and as "practice at camp" describes, soldiers commonly met enemies hand-to-hand with rifle butt and bayonet. Moving from trench to trench by foot meant surging into harsh, open terrain that left you open to enemy fire. A line of soldiers going over the lip of a trench remains an enduring image of WWI combat and one that future armies strove to replace with more nimble, mechanized units.

Why did Goudey produce this set in 1933? Hitler had just come to power that January, and it's likely the roiling European political climate appeared regularly in American headlines. While wide-scale conflict was still years away, Goudey could've guessed that kids would snap up the excitement of wartime events, even those from their parents' generation.

For this set, Goudey used the same dimensions and card stock as their better-known 1933 Big League Gum (baseball) and Indian Gum. These World War Gum set galleries seem drab today, but with 30s cinemas showing mostly black-and-white movies and newsreels, collectors of the day might've accepted it as readily as color.

Value: I bought this low grade #5 at the 2015 National in Chicago for $3. With no special "stars," scarcity and context drive prices for individual cards. A graded set auctioned in 2013 for ~$3000.

Fakes / reprints: Haven't seen any in the marketplace, but my knowledge of non-sports (and its potential shenanigans or pitfalls) is far behind that of baseball sets.
Posted by Matthew Glidden