This card's always intrigued me, as it could show Maury Wills making a play at second long before he worked out his unusual contract kerfuffles with Topps (who'd passed on signing him for $5 at a minor league tryout) and first appeared "officially" as a Pirate in their 1967 set. So is this really an unnamed Wills covering second? Yes. 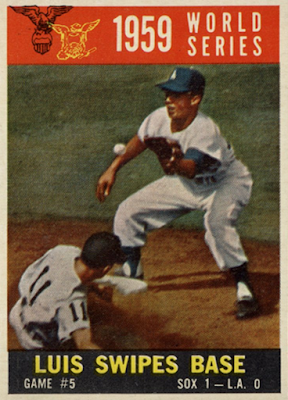 While this is Maury Wills taking a throw as Aparicio steals, it's from game 4 instead. Fellow card blog Horizontal Heroes even found the original press photo that Topps repurposed in its post about 1960 Topps #389; Topps just repurposed it incorrectly as "Game 5."

If that's not good enough for you, the official MauryWills.com gallery also includes this card between Maury's 1960 and 1961 Bell Brand potato chip cards. 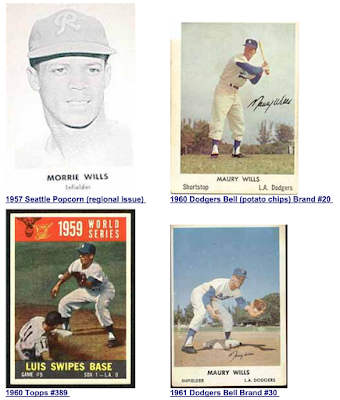 
So what actually happened in game 5? A piñata of White Sox pitchers combined to beat Sandy Koufax 1-0, so you can imagine why Topps card editors didn't find a lot of great photos to work with. No "SUPER SANDY" or "NELLIE OUTFOXES LA" really fit. I almost wouldn't blame them for intentionally putting Aparicio's steal on the wrong day, as it's a simpler "story" than explaining how Chicago's pitching changes and outfield positioning kept the Dodgers in check. Check out the series highlight reel to see what I mean and wind to 21:21 for Game 5.


Those highlights aptly demonstrate the "every animal in the barnyard" feel of playing in LA's Memorial Coliseum for 1958-59, the franchise's first two post-Brooklyn seasons. Outfielders had to account for lots of unusual features and not just the ghosted NFL yardage lines. Their left field wall stood a scant 250 feet away, only moderating easy homers with an unusual 40-foot screen.


That 90,000+ fans went through LA's turnstiles for game after game on an oval "diamond" says a lot about California's hunger for Major League Baseball. That Walter O'Malley's Dodgers proved a dominant force for its first decade out west did a lot to maintain Dodgers / Yankees as baseball's Golden Age rivalry. Maybe Topps should've titled the Game 5 card as "O'MALLEY WINS AGAIN!"

UPDATE: Thanks to the Internet, you can relive the whole Game 5 radio broadcast at PodBay.fm (and Game 1 as well).
Posted by Matthew Glidden