Have you seen this man? Last spotted rounding second at full speed? 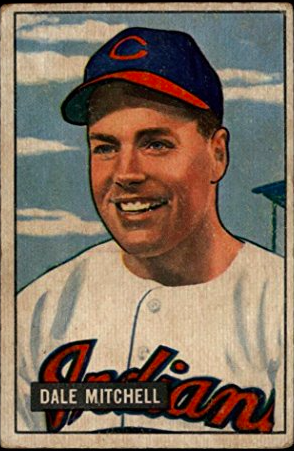 If baseball fans mention Dale Mitchell in conversation, it’s usually as the trivia answer for “who did Don Larsen catch looking to end his World Series perfect game?” (Video and highlights at MLB.com.)


And yet! For that one-game notoriety, Dale was no choke artist. He ranks #17 in OPS+ (115) for all MLB hitters in the decade following WWII and was even harder to punch out, ranking #14 on MLB’s career list at 33.48 AB/K. An all-time contact hitter getting caught looking to end a World Series perfect game says a lot about Larsen’s performance that day. (Better men than I question the ump’s eyes, but it’s now inseparable from history.) 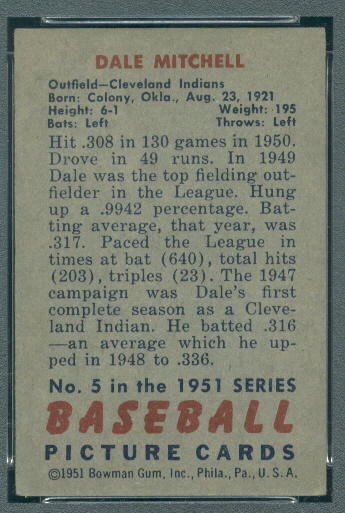 For all the clean lines of 1951’s hand-colored front, that back design shows a conceit common to the Bowman era : "text, text, and more text." Read me, said the cardboard. Numbers must be described and put in the context of history! Statistical grids are for college professors, not kids in a candy store! 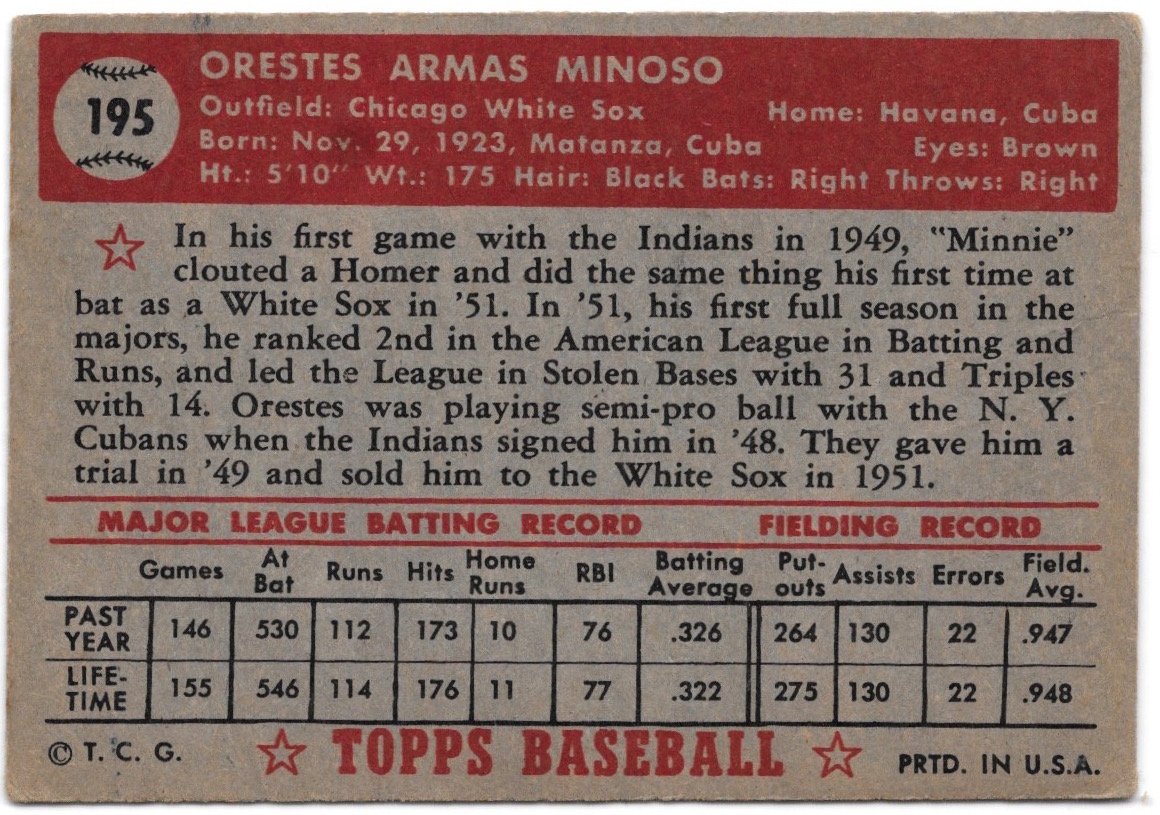 Topps successfully moved many of those stats “south” for their 1952 debut and discovered how readily kids responded to the “grid.” Now, it’s hard to find a card that doesn’t do stats this way, other than intentionally retro versions like Allen & Ginter. 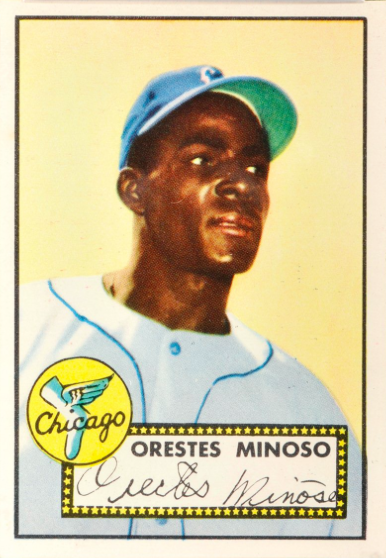 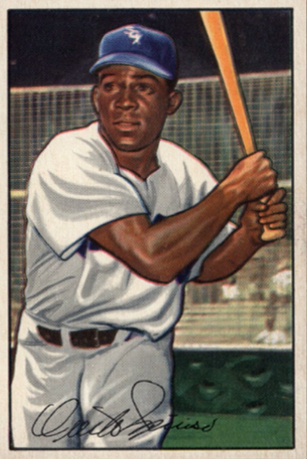 Furthermore, when the self-proclaimed GIANT SIZED (2 ⅝” x 3 ¾”) 1952 Topps set arrived, kids bought so many palm-filling Mega Minosos that Bowman had no choice but to relegate Mini Minoso’s card size (2 1/16” by 3 ⅛”) to the dustbin of competition. By 1953, they closely followed the Topps example, as seen below. 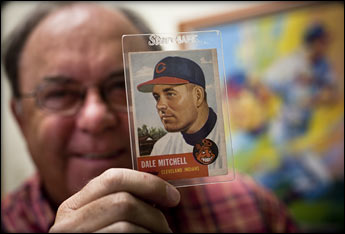 Back to Mitchell, who figures into some interesting baseball footnotes. When Roy Halladay (nearly) matched Larsen with a 2010 postseason no-hitter, Mitchell’s son noted that Brandon Phillips got the unenviable “last out” credit shared by his dad; see “Was No Goat” by Dave McKenna. (That’s the younger Mitchell above, with his dad’s 1953 Topps card.)


Dale notched a singular achievement in 1949, tallying 23 triples and just 11 strikeouts. No one before or since hit 20+ triples at twice the pace of their strike outs. Not Stan Musial, not Willie Mays, not Joe Shlabotnik. Only dead ball star Wee Willie Keeler came close with 12 triples and 5 strikeouts in 1901. 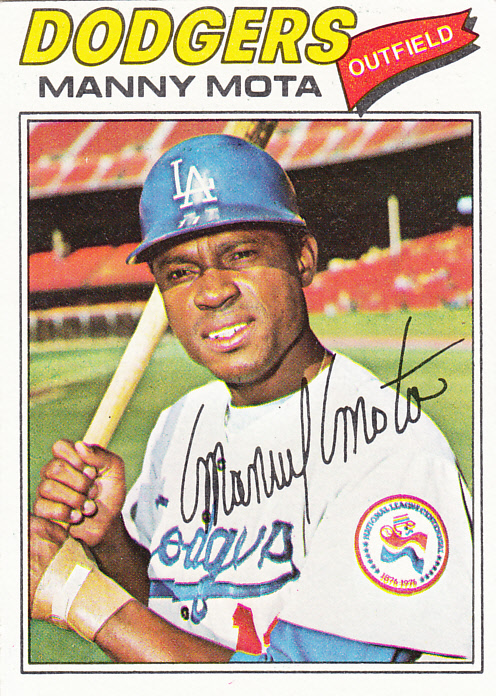 As a career comparable, Dale’s like Manny Mota, who could always make contact and hit for average. Mota spun his pinch-hit skills into a 20-year career and Mitchell might’ve done the same, if he’d played during an era of expansion and specialization.


Value: Low-grade 1951 singles cost a dollar or two and I acquired this #5 while building that Bowman set. Those hand-colored fronts are still one of my all-time favorite designs. 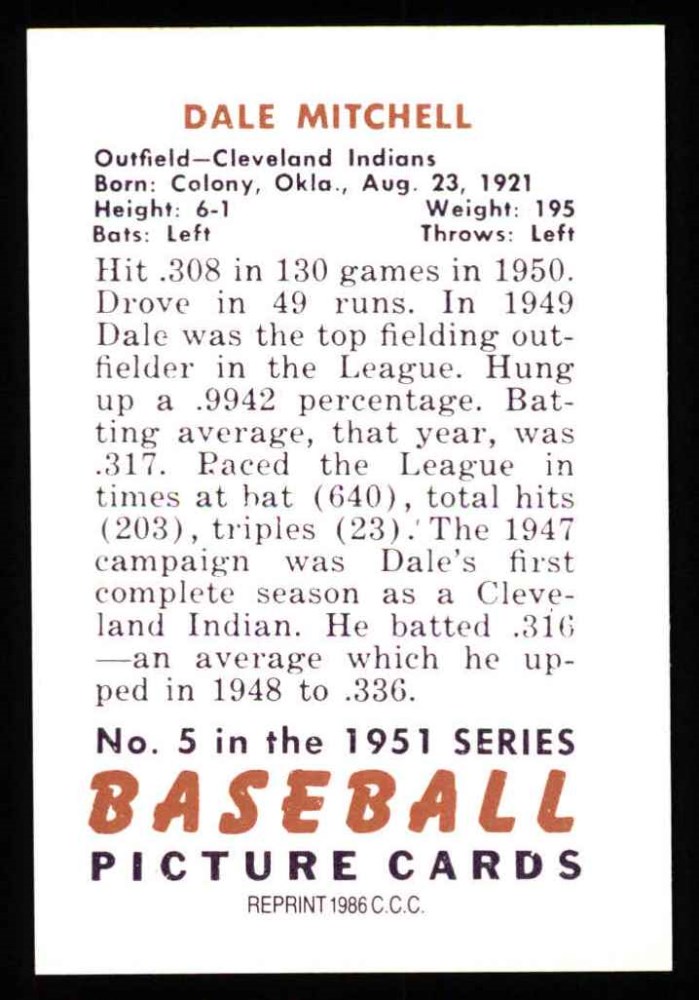 Fakes / reprints: You can buy 1951 Bowman as a complete reprint set, so look for differences between vintage and modern cards when seeking type cards. Most legitimate reprints use brighter card stock, higher gloss, and include REPRINT somewhere on the card itself.
Posted by Spike Glidden