"How should I pose?"

"Then what, put it on my shoulder?"

"Hold it up and smirk like you're about to bunt an underhand pitch from a circus clown." 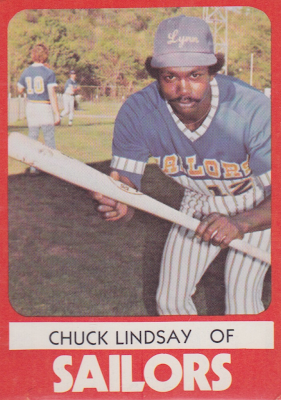 Lynn's Sailors started as a Seattle AA affiliate and fielded (among others) future Mariner and Red Sox shortstop Spike Owen. They folded after 1983, but pro ball returned to Lynn twice in the 3 decades since. I attended a handful of (independent) North Shore Spirit games during their 2003-07 run and remember Dick "The Monster" Radatz occupying a hefty percentage of their bullpen.

Many Massachusetts residents know Lynn for this bit of doggerel (and variations on it).


This exaggerates what you'll find in Lynn. No one gives away gin for free. 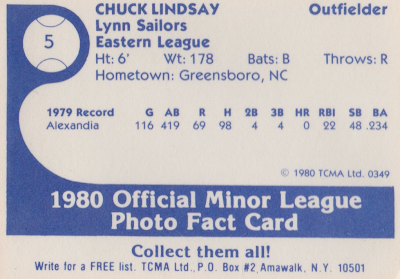 Lindsay didn't break past AA, probably for lack of power (1 minor league homer), and hung up his spikes after 1980.

TCMA printed 23 cards for this set. (A few names look familiar because they went on to play for Seattle in the early 1980s.)

Value: This #5 cost $2 from MinorLeagueSingles.com. Teams run as low as $6 on eBay, as none of its players developed into MLB stars.

That photo is awesome! Great pickup.

Great stuff. It has a slight Bad News Bears feel.