Gordon Eakin played three seasons with single-A Modesto, leaving the pro ranks in 1981 at just 23 (career stats). Based on books about playing in the minors, many at that age decide either their heart isn't into the travel demands (and lousy pay) or get the message there's no promotion coming to higher levels. 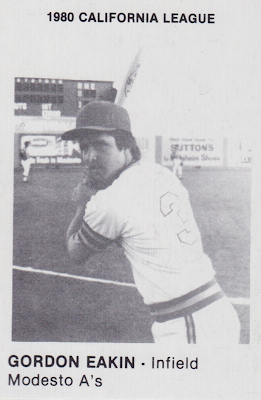 Instead of disappearing into a sales office or construction site, Eakin switched to elite softball after Modesto, building a long career as player, hitting instructor, and coach. 2012 marked his tenth year helming the program at BYU; here's Gordon today. 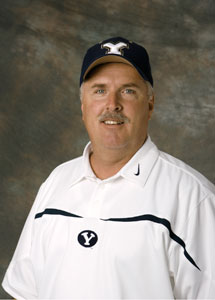 Modesto-based Frank Chong first printed sets for Oakland's single-A team in 1977 and continued annually into the 1990s, switching to "Chong Enterprises" by 1980. Modesto's biggest names from that era include Rickey Henderson (1977), Jose Canseco (1984), and Mark McGwire (1985); Rickey's rookie is one of the toughest on my #5 type want list. 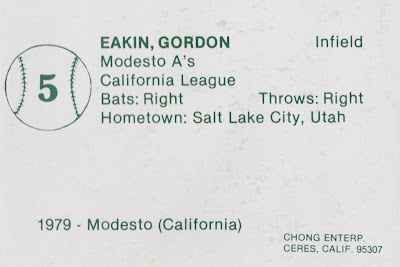 This is of the few times last name, first name appears on a card back and I didn't see it on other Chong Modesto sets, so might've been an editing error (or "choice"). 29 players comprise the checklist.

Value: This #5 cost $2 at MinorLeagueSingles.com. Team sets vary in value by number available and included stars. Clyde's Stale Cards quotes the 1985 print run at just 1700, which means a lot of competition with player collectors for very few cards. (1980 only has one future big leaguer, Mike Woodward, so runs cheaper than most.)

Fakes / reprints: Consider stars like Henderson, Canseco, and McGwire at high risk for reprinting and stick to lesser-known players if you're looking for a type card. (Chong himself reprinted those and other stars for a 1989 "Modesto alumni" set.)
Posted by Matthew Glidden