Who's ready for more Topps test issues? Finally found a proof scan for this obscure and pricy Stand-Ups set on eBay last week and its #5 type card features a guy New York fans know best as a member of the 1969 Miracle Mets.


Stand-Ups rank as the rarest non-standard 1967 Topps issue, behind comparatively plentiful 5"x7" Pin-Ups (set profile) and peel-off stickers for two teams (Pirates and Red Sox set profiles). It's hard to find much info about their production process, as it's almost certain they never saw life outside of a Topps print shop.

Robert Edwards Auctions sold a few 1967 Stand-Ups over the years, both of uncut proofs like the scan above and some thicker, rarer die-cuts. Their $41K auction for 12 die-cut versions included this set commentary.


"Rarer and more desirable [are the] thick die-cut variety, which is the form in which the cards were actually intended to be issued (as opposed to thin proof cards cut from sheets). 1967 Topps Stand-Ups are one of the rarest and most intriguing of all 1960s Topps issues. It is almost certain that these cards were never issued to the public, and their astounding rarity is consistent with this speculation...the cards were produced on one-quarter inch thick cardboard stock which has been die-cut punched. The design allows the player's head to be punched out of the black background. Additional small punched-out pieces along the bottom of the card, when properly used, were intended to allow the player's head to stand for display."


In other words, pick die-cut over "plain" proofs when you're sifting through those 25-cent "test issues" boxes at card shows! 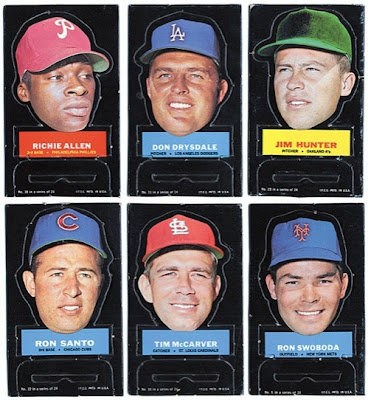 This group scan from the auction illustrates the die-cutting, punch-out "head stands," and some amazing teeth on Don Drysdale. Its full checklist includes 24 floating heads.

UPDATE: Here's how the stand separates from the frame. You then insert a player plaque into its center notch for creepy, floating head display.

Value: eBay seller Irishhosta listed the #5 proof for $2500 on eBay, the first time I've seen it outside of an auction house. (Their lot went unsold.) Choice quote from its listing: "No major grading company has ever professionally encapsulated a single specimen of Ron Swoboda." I vote we keep Mr. Swoboda in one piece, thanks.

Fakes / reprints: Haven't seen any fakes in the market, but they're so valuable and simple in design it's possible they exist. I recommend buying from dealers who are willing to guarantee the purchase price.
Posted by Matthew Glidden

That's one of the Ron Santo items I doubt I'll ever own. Guess I'll have to be happy with the 1964 version. http://canthavetoomanycards.blogspot.com/2011/01/santo-saturdays-white-whale.html

Yeah, similar design but soooooo much easier to find from 1964. Almost too bad this 1967 test exists. It's interesting, but I'd sleep better at night if it didn't leave that big hole in the type list.

I wish I could get my hands on the Catfish floating head!

I hear that hunting catfish by hand is a challenging enterprise... :-)

I keep the Robert Edwards Auctions catalog around just so I can drool over this entry periodically.