Born on August 9, Troy Percival, who holds the record for birthday saves with four. 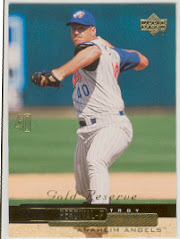 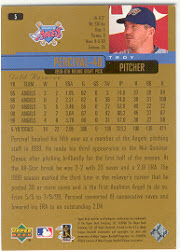 Troy Percival started just once in his career and it was a doozy. Anyone remember the final STL game of 2007? St. Louis and Pittsburgh combined to use 18 pitchers, five different Cardinal relievers logged holds, and the box score is a nightmare of crossed-out names. Full credit, by the way, to Tony LaRussa's ability to find gold in Percival's rehabbed arm--he didn't log any saves that year, but posted a phenomenal 246 OPS+ in situational work.

Upper Deck's "Gold Reserve" is a 300-card parallel to their 2000 standard set, with a double-handful of serial-numbered inserts and relics; Baseballcardpedia breaks them down for you.

Happy birthday to one of baseball's all-time closers!
Posted by Matthew Glidden