Caribbean baseball owns a long, nuanced past as both supporter and rival of MLB attention and its member countries continue to supply and develop talent at every professional level. While the Dominican Republic produced more big league players since integration, Puerto Rican nearly equals it in both history (first league founded in 1898) and significance (first native player in 1942). Their pro teams currently play under the banner of PR's first Hall of Famer as Liga de Béisbol Profesional Roberto Clemente.


Outside interest in Puerto Rican pro leagues blossomed during the post-WWII economic boom, thanks to new ballparks and growing participation from MLB players, who enjoyed the island's warm weather and a chance to play during their normal off-season. Across-the-board racial inclusion also meant Negro Leaguers, MLBers, and local players suited up together in an expanded version of stateside integration. 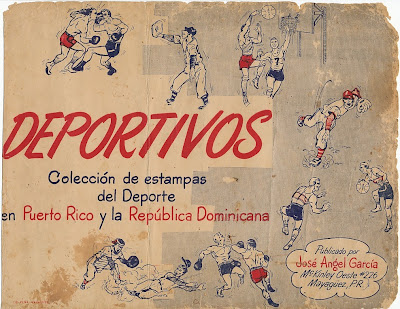 NYC-based Denia also fashioned an album for their multi-sport Deportivos set, as published by local printer Jose Angel Garcia. Collectors mounted these paper-thin "cards" onto its pages like stamps, a typical practice for most of the Caribbean and Latin America. That habit makes glue and back damage a common sight, so most cards grade VG at best.

The album back shows a tin of Denia powdered milk and PR's baseball  broadcast stations. I'd love to see interior page scans, which might've shown the whole set or larger team photos. 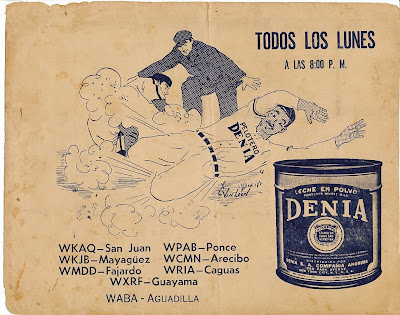 CubanBaseballCards.com hosts a 144-card checklist with many gaps, cards that are still unknown due to rarity. The "in action" series belongs to a larger Denia set of baseball, basketball, and boxing cards, 394 in all. Quite an undertaking for a powdered milk company!

Fakes / reprints: Haven't seen any in the marketplace. You could fake them with modern equipment, given the set's thin paper, limited color, and blank backs. Best to buy from experienced sellers when picking up foreign type rarities like this one.
Posted by Matthew Glidden