My second batch of questions for 2012 MIT Sloan Analytics Conference panelists and writers starts with football. While the numbers-based sports world generally fits baseball and basketball best, NFL teams also look for ways to improve analysis of their player performance and game-planning.

Question: Do you use any stadium-specific measures in preparing for games or evaluating free agents?

Marathe: Yes, mostly for kicking. The winds in San Francisco frustrate a lot of teams, but it's not the only stadium with unusual conditions. We also consider Buffalo a particularly tough place to punt, for example, and any ball sails in Denver, so you adjust prospective players accordingly.

Question: Where should Peyton Manning end up in 2012? [Asked prior to the Colts cutting Manning, but many people expected it to happen.]

Schatz: Seattle gets my vote, given their improved defense and need for more experience and accuracy at QB. Tarvaris Jackson did OK for them last year, but few would argue Manning isn't an upgrade. Arizona's also a decent choice, but the team would have to dump their commitment to Kevin Kolb.

Question: You're living in Las Vegas on assignment for Grantland, with an eye on both the world of sports betting and the city itself. What's one thing that surprised you about how Vegas watches sports?

Barnwell: The focus of bettors on points in garbage time, when victory is out of reach but someone has to finish playing the game. You've got people agonizing over every missed free throw or "prevent defense" touchdown when the spread's tight and money is on the line.

Question: Seems silly to ask, but are you any relation to Bill Simmons [of ESPN and Grantland]?

Janet Simmons (ESPNBoston Editor): Yes, Bill's my nephew. As a matter of fact, I helped him get his first writing job many years ago. We're both working with ESPN now, so I guess history comes full-circle. [Janet described her conference experiences in Eyeballing the saber metrics game, which includes a Red Sox dilemma in 2003: should they sign David Ortiz? Or Brad Fullmer?]


Janet's article did bring up stats from one player's card, Fred Lynn. No doubt about it, Lynn tore the cover off the ball as a rookie in 1975 (and fashioned a decent career thereafter). 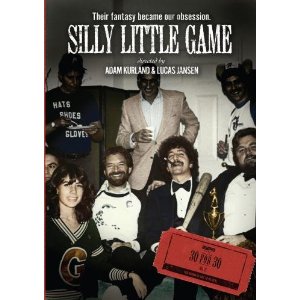 The conference's game room (an air-hockey-and-TV break area) broadcast sports analysis shows throughout. My favorite was Silly Little Game, ESPN's 30 For 30 on the start of rotisserie baseball (and fantasy sports in general). Here's its trailer.


The dramatic re-enactments look (appropriately) goofy, but fantasy sports are big business these days and it's a solid topic to explore. I caught most of the program during Saturday's lunch and can confirm it's up to the same level as most other 30 For 30 shows, which is to say "good."

Thanks for following my non-card diversion for two days and I recommend attending the conference if you can swing the trip to Boston and like hanging around with people who crunch numbers for a living.
Posted by Matthew Glidden

You're welcome! Can't wait for the number-crunching to be done and the real baseball to start.