Prior to last week's number-crunching, soda-pop-drinking MIT Sports Analytics conference (and my personal highlights), I boned up on some of baseball's past glory, just in case a historian wanted to talk about Gashouse Gang utility players, the Polo Grounds' crazy outfield, or Dizzy Trout vs. Dizzy Dean. (The closest it got was an "underrated players" chat with Bill James, which was good enough for me.)


One guy that popped up (no pun intended) during my research: St. Louis second baseman Julian Javier, an everyday player for most of the 1960s, two time All-Star, and top-10 MVP finisher during their 1967 championship season. (Voters filled 4 of the first 9 spots with Cardinals.)

I knew Javier as the guy who escaped Bill Mazeroski's shadow--Pittsburgh signed and traded Julian before he ever appeared in a Pirate uniform--but am surprised how underwhelming his numbers look on paper. It sort of goes without saying that 2Bs couldn't hit in that pitching-heavy era; his "peak" with the stick only broke average (100 OPS+) twice. He did finish high in range measurements for the early 60s, but lost a step by 1965 without reducing his total errors, so rates below-average defensively for his career.

Career numbers be damned, Topps published this series of playing tips on Bazooka gum boxes following the St. Louis title year, so Javier got their nod at second base. Each of the set's 15 panels shows a tight portrait and illustrated game situations, which I can easily imagine kids miming in backyards everywhere.


Wonder what the Bazooka card for this double play would look like? (I assume they altered logos to avoid a Bud Selig video crackdown.)

The full checklist includes six HOFers and two Maury Wills, once each for his small ball skills.

Topps also produced a paper booklet that collects all 15 panels into one product and made it available as a promo item for young collectors. The Topps Archives found advertising connections to both MacGregor clothiers and Boys Life magazine. 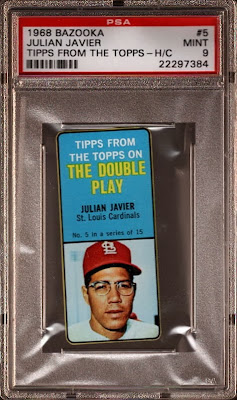 Value: Bazooka panels of lesser-known players cost $10-20, thanks to the set's rarity. HOFers like Mays and Yaz run two or three times that.

Fakes / reprints: Haven't seen any in the marketplace, though Topps reused this "Tipps" concept in at least one other set without the inset player photos.
Posted by Matthew Glidden