An updated 2012 2022 ode to four gentlemen tied together by American staples, jazz music and baseball.
Dave Frishberg (1933-2021) set the names of almost 40 golden age players to his bossa nova tune "Van Lingle Mungo" after enjoying the musical sound of Mungo's own moniker. As its song profile notes, former Dodger hurler Mungo hoped for some income based on the song, but learned he'd have to write his own to do so. Several players mentioned in Frishberg's tune lived well into the 21st century.

Boston fan favorite Johnny Pesky (1919-2012) played for teams other than the Red Sox, but became an inseparable part of the franchise, serving as instructor, coach, and namesake of Fenway's right-field pole. 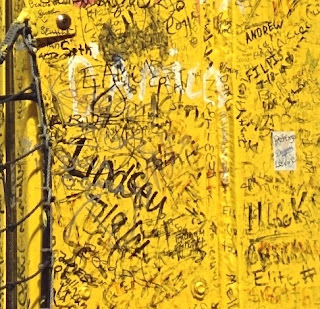 You could write a whole album of jazz songs based on names and tags from the pole itself.

WWII-era player Eddie Basinski (1922-2022) spent only a few years in the majors, but spun his war time opportunity into two MLB stints, first with the Brooklyn Dodgers and later with Pittsburgh. Eddie jumped right from the semipro sandlots to the bigs, an almost unheard-of feat detailed further in Slangon's write-up for his autograph (and custom card) of Mr. Basinski. He was the last surviving player mentioned.
Dave and Eddie share a certain glasses-first poise in those photos and passed within a couple months of each other across winter 2021-22, lowering the curtain on everyone connected to "Van Lingle Mungo."
I can't locate any professional or fan-made baseball cards of Frishberg, so let's instead enjoy TCDB's parade of cards for players mentioned in the song itself.
Posted by Matthew Glidden

Today is also the birthday of another player mentioned in the song, Frenchy Bordagaray.
http://canthavetoomanycards.blogspot.com/2012/01/blow-out-candles-january-3.html

I like how Frenchy's obit claims he "staged a one-man mustache revival in the major leagues" for the 1930s Dodgers. We should all be so memorable!