Given the special love vintage collectors and fans have for Yankee teammates Roger Maris and Mickey Mantle racing to beat the Babe's home run record in 1961, it's pretty cool that Maris himself appeared on a #5 from that year. And what else says BOOM to a kid like BAZOOKA gum?


Roger's power didn't come out of nowhere, as he averaged ~20 homers in Cleveland and KC prior to reaching New York. The cozy Bronx fences boosted that to 39 homers and an AL-leading .581 slugging in 1960, numbers that could've been higher if he'd played every day (career stats at B-R.com). 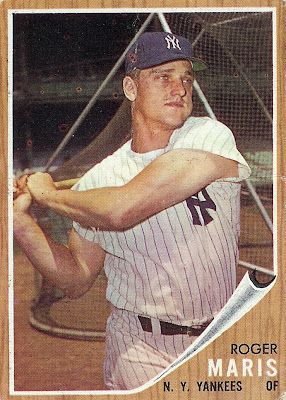 This blog recently featured Roger as one of the 1960 Cleveland CouldHaveBeen-dians and his stop in KC made him one piece in a larger puzzle of Athletics-to-Yankees talent shifts. Read David Fleitz's analysis of the KCA-NYY trade history for a fuller picture of how New York stocked many of those late 50s and early 60s World Series lineups. (1961's squad ranks high in any list of "all-time teams.")

Fakes / reprints: 1961 fakes probably exist, given Bazooka's basic cardboard stock and blank backs. Look to buy from sellers that have a spread of vintage from that era, rather than just stars like Maris, or stick to commons for your type collection.
Posted by Matthew Glidden

Still the home run champ in this baseball fan's eyes. Such a tragic story, though.

Definitely a guy who left the game (and us) too soon.