During the off-season, Red Sox fan site Section 36 covers a wide range of baseball topics, numbered 1 to 36. It fills the chilly winter months for locals like me, who spend most of February creating spreadsheets that analyze snow accumulation. Today's fifth post for 2011-12 talks about Fenway's short (5') wall in front of its side-by-side outfield bullpens. 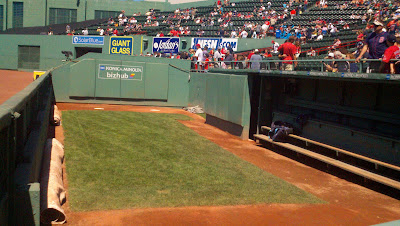 
"To me it looks like a fairly careful calculation. Obviously they took an average player and stood him up against a wall. They had him take a little hop, as if he were reaching for a ball. They then marked the spot where his ribs were. 5 feet. That way, anyone crashing into the wall would be sure to at least bruise a rib, if not break it completely and puncture their lung."


Jay Buhner made one of Seattle's pinnacle defensive plays by leaping this wall to bring back a bomb hit by Moneyball binky (and former Sox slugger) Scott Hatteberg on June 29, 1997.


Jay's effort was great enough to rank first on Mariner Top 5 Home-Run Robbing Catches (video at the MLB.com link). "It was the kind of play outfielders always dream about‚" Buhner said. (No doubt!)

Thanks for the highlight reminder and find more Sox stuff at Section 36.
Posted by Matthew Glidden