Wild-card cinderella St. Louis and AL West champ Texas kick off the 2011 World Series tonight in a contest that experts predict will break records for calls to the bullpen. The Rangers boast a strong rotation and powerful bats, but Albert Pujols hits plenty himself and Tony LaRussa loves to play chess with his relievers; I bet grandmaster lefty Arthur Rhodes makes at least 3 appearances. 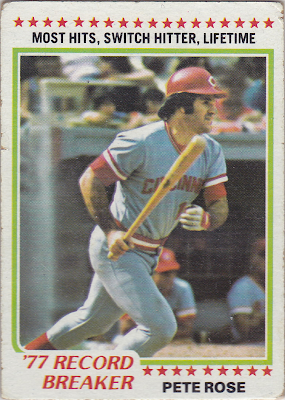 Charlie Hustle participated in six World Series, first as a key cog in the 1970s Big Red Machine and later as veteran support for the early 1980s Phillies. His teams won three, CIN in 1975, 1976, and PHI in 1980. Neither total is close to a record, but I'm surprised that someone who never played in New York reached the series so many times. Yankees dominate the top 20 list of players with multiple rings and former ChiSox/A's star Eddie Collins is the only non-NY player to win more than five titles. 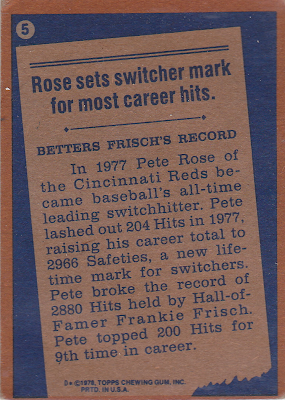 Back in 1979, SABR took a "Baseball's Best Switch Hitter" poll and Rose finished second to Mickey Mantle. Pete had 3164 hits by that point and taking this poll silently implied his productive days were done. As we know now, Rose took the field for another 7 years, setting records for both hits (4256) and games played (3562). He never challenged Mantle's power numbers, but I expect some teams would prefer his multi-position, IF/OF versatility. Rose played anywhere they needed him and fell just 10 short of logging 600 games at an amazing 5 different position. (He played 590 in RF.)

Value: This #5 runs about a dollar and low-grade 1978 singles cost a quarter or less.

Fakes / reprints: Topps includes vintage reprints in their modern sets, but I haven't seen any "special" cards like the record breakers.
Posted by Matthew Glidden