Congrats to 2011 World Series winners St. Louis, who captured their 11th overall title with a string of amazing comebacks in game 6 and a dominant game 7. I had no horse in the series, so enjoyed each twist and turn for its own sake, as great October baseball. 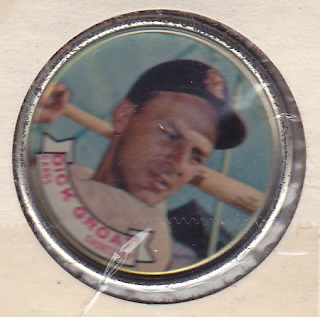 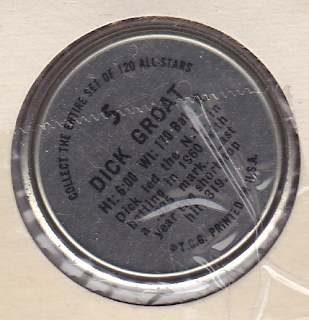 All-Star coins dropped the "collect the entire set of 120 All-Stars" headline, since their own numbers exceeded 120. As with other sets, the (c) T.C.G. tagline stands for Topps Chewing Gum, since just about everything they created was sold to move sweetened gum or candy.


Groat pulled a hidden-ball trick on Mickey Mantle in 1964's World Series, one of only two known successful instances in the post-season. Dick faked a return throw to pitcher Roger Craig in the third inning of game four and caught Mantle off second when he took a lead. The play ended New York's threat and Ken Boyer's grand slam powered St. Louis to a 4-3 win. Haven't seen someone try that lately in a major league game--anyone witness one this year?

Value: Low-grade coins cost $1 or so, up to several dollars for HOFers like Mantle.

Fakes / reprints: Haven't seen any in the marketplace and it'd be a hard set to fake.
Posted by Matthew Glidden