1970s hair is a special breed of hair. It feathers, it fluffs, it 'fros, and it Farrahs. Oh boy, does it Farrah.


Topps snagged a couple of classic 1970s hairstyles for their 1976 victory leaders card, courtesy of Jim Palmer's feathery waves and Randy Jones's blond frizz. The latter might not have become a famous Jockey underwear model like Palmer, but did plenty of great work on the mound. (Randy's 92 wins are tied for second all-time by a Padre pitcher, trailing only Eric Show's 100.) 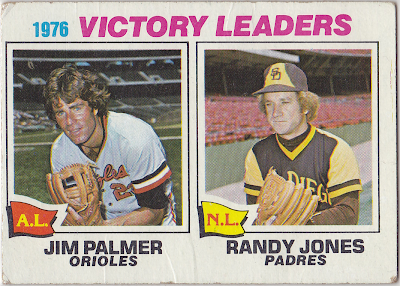 Both pitchers garnered Cy Young awards for their work and beat out competitors by a healthy margin (voting results at B-R.com). The AL's 2nd-place finisher Mark Fidrych picked up Rookie of the Year honors and the NL split theirs between two guys you might not have heard of, Padre reliever Butch Metzger and Reds starter Pat Zachary. Not many seasons bestow ROY hardware on one pitcher, let alone three! 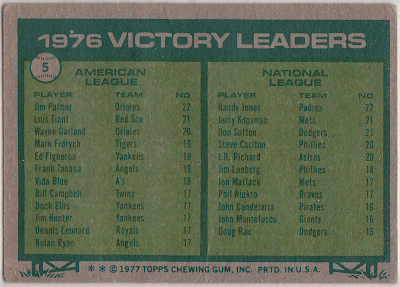 I've always thought of 1977's wide borders, double-green backs, and ALL CAPITALS as a little stale. 1978, on the other hand, made a nice jump to script fronts, All-Star badges, and...product placement. 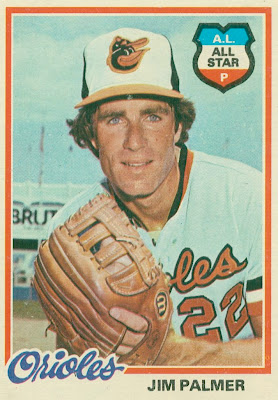 Value: You can find this #5 for a dollar or two.

Fakes / reprints: O-Pee-Chee did their own version of this card, which differs by card stock and French (1977 OPC set profile). Topps reprinted several 1977 stars as Archives inserts for modern sets, differentiated by glossy finish and foil stamping.
Posted by Matthew Glidden