As the tobacco era of baseball cards waned, candy and snack makers stepped in with similar cross-promotional ideas. Cracker Jack, already immortalized in the chorus of "Take Me Out to the Ball Game," produced a pair of such sets, now cataloged as E145-1 and E145-2, across 1914 and 1915. 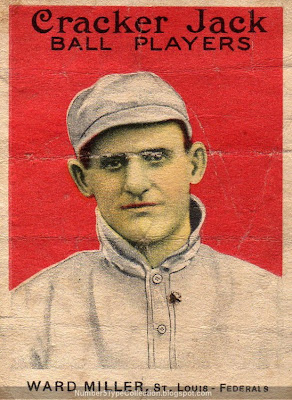 Unlike the narrow, ad-back cards produced for smokers, Cracker Jack went with broad images on the front and detailed player bios on the back. 1914's text refers to a "complete set of 144 pictures," but 1915 numbers to 176, their easiest distinguishing feature. Card stock also changed between the years, probably to match up with 1915's collectors album. (See Old Cardboard's profile for further production details.)

If you had a family hand-me-down set of Cracker Jacks, where would you take it? Perhaps an Antiques Roadshow in Kansas? It happened in 2008 and the show appraiser provided some set details (and value) in the transcript. 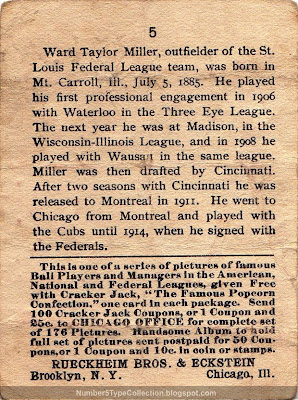 Ward Miller played for the St. Louis Terriers of the outlaw Federal League, an 8-team attempt to compete directly with the American and National Leagues. They were rewarded with his finest seasons at the plate--122 OPS+ in 1914 and 125 OPS+ in 1915--and league-average work in the field.

When the Federal League dissolved after 1915, Terriers owner Phil Ball "joined" the AL by purchasing the St. Louis Browns and merging both teams' rosters. Miller stayed with the franchise through 1917, so is one of the few players to play in all 3 "major" leagues: American, Federal, and National.

Value: This #5 cost $30, an OK price for low-grade singles. Unfortunately, the sheer quantity of graded and faked Cracker Jacks in the market makes it difficult to find low-grade authentic cards at any price.

Fakes / reprints: So many counterfeit and reprint Cracker Jacks cards exist that I recommend you buy a graded type card or work with dealers who know pre-war vintage inside and out.
Posted by Matthew Glidden

Love the Cracker Jack cards. Hopefully one day I'll save up the cash and get an off-off-grade common.

Best of luck in that pursuit! Unfortunately, there are a lot of reprints/fakes out there and that pushes up prices on real ones. Worth it when you get one!

I don't want Antiques Roadshow often, but when I do, I always hope they'll discuss a baseball card collection. Never seen such a discussion, though. I would've been glued to this one.