This #5 still looks hale and hearty, though a previous owner slimmed it down significantly with some scissors. Fortunately, they left behind the name, number, and the Babe's sly smile. That's enough to catalog it as a W519, part of a 1920 set of 20 strip cards.

This blog already profiled a mirror twin to today's Bambino, the 1921 W521 #5. Both sets probably used the same distribution, as horizontal paper strips sold for a few cents at stores, carnivals, or arcades. 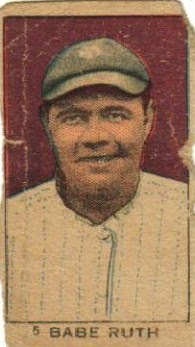 The Babe Ruth Cards site includes scans of several W519s, all slabbed and ready-to-buy. (No connection or endorsement implied.) Of note, the PSA and SGC graders didn't originally distinguish W519-1 and W519-2 varieties, but some recent Net54 scans include that detail.

Agreed, this Ruth cost over $100, even before pre-war stuff shot up to such high levels.

...and psyched to see Kids in the Hall shooting a new series. 30 Helens also agree on that.