Pro artist Bob Parker, known in baseball circles for cartoons he drew for classic Topps card backs, based several sets in the 70s and 80s on his own player drawings. This 1977 set profiles a mix of players, 24 in all, spanning a number of baseball eras. The #5 features Redleg Doug Flynn, a decent shortstop most widely known as one piece of the NYM and CIN trade for Tom Seaver. 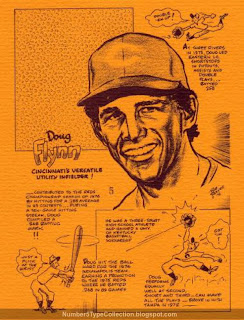 Like most of Parker’s other sets, this one comes on thin, over-sized card stock without finishing gloss. It’s less of a final product than most publicly circulated sets, so I assume he printed these cards and sold them directly to collectors. The backs are blank, so what you see here is what you get.

This card's art style evokes the cartoonish 1938 Goudey set, with batting and fielding poses encircling a portrait sketch. (See particularly that set’s latter half, where cartoons show up more frequently.) I think the homage is a charming effect and would like to see it on more contemporary issues. Unfortunately, #5's composition isn't representative of the whole set. Most cards in "More Baseball Cartoons" use full player poses, not just a head shot, so don't have space for the surrounding highlights.

Though it lacks back text and stats, Bob made this set avant garde by producing it himself. Almost any artist can turn out a better product in the 21st century, given computer drawing tools and a quality inkjet printer, but publishing your own card sets really meant something in the President Carter years. Fellow artist Robert G. Laughlin created similar (and arguably better) oddball sets in the same generation, but the main attraction is the reappearance of Parker’s card back highlight style and excellent sketch work.

These sets do appear on eBay, including a current listing at $99 BIN. If that's too rich for your blood, singles occasionally show up on both eBay and the Beckett Marketplace.
Posted by Matthew Glidden