2017 set my new high water mark for hours on the National floor. Most years, I duck out for city sights at least one day, even at shows in Atlantic City. I skipped that tradition this year, as my "Chicago brother" moved west to Seattle earlier this year and I no longer have that connection to his Wrigley Field side of town. To keep a long story short, more hours on the National floor meant more cards came home with me!

Each National show occupies a full week, Monday to Sunday. Monday's "set up day" for most dealers, as they bring trucks and cases full of products onto the floor through massive loading docks. Dealers spend a lot of Tuesday deep in buy/sell/trade negotiations with each other and I'm sure the corporate sponsors like Topps and PSA do a bunch of face-to-face business. Wednesday afternoon's the first day open to the public and I flew in midday from Boston to start shopping and catch up with fellow OBC collectors. Early highlights included these $1 box finds. 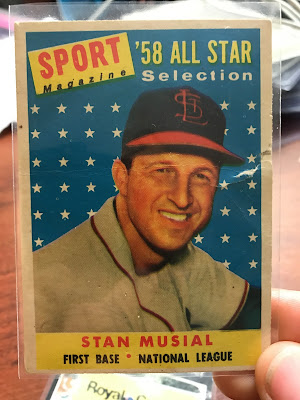 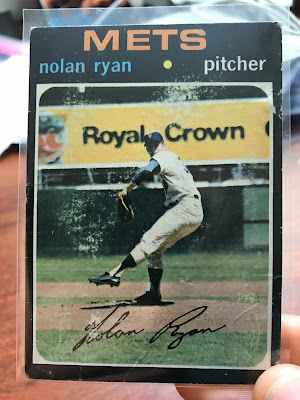 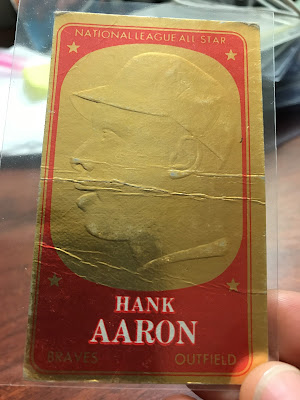 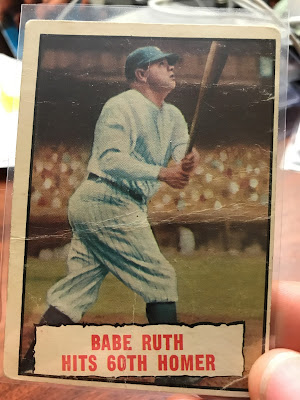 National show floors comprise hundreds of tables and millions of things to throw money at. Single-minded collectors stick to their planned wantlists and budgets, despite temptations galore from all sports and eras. I am not that single-minded and wander within The Rules. I did OK this year.

The Rules (...are more what you call, 'guidelines')

Number two's a problem because you need to stop for restrooms every now and then. (Heh heh, "number two" heh heh.) Despite my bladder's best wishes, there are not restrooms neatly placed at the end of every row.

Number three's a problem when you see tables with OMG is that a great deal prices on them. Those $1 cards were great deals, BUT not on my wantlists, violating number one. (They're all in the hands of other OBC collectors now, so friends did benefit.) 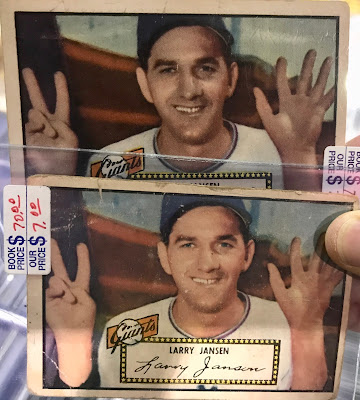 Not sure why, but you could find commons for under $5 at a bunch of tables. Over the past few years, eBay tilted closer to $7+ per card, so this was a pleasant surprise and enough reason to start a low-number 1952 set. I swung a pair of larger deals and bought 100+ cards for ~$3/card.

Banged up 1930s appear to have jumped from $8/card to $12-20/card when I wasn't looking. Would've come up well short of my National goals if I hadn't been willing to pay more. Landed about two dozen hits in that "new price range" during the week. Biggest hit, 1933 World Wide Gum #84 of backup catcher & occasional spy Moe Berg for $70. 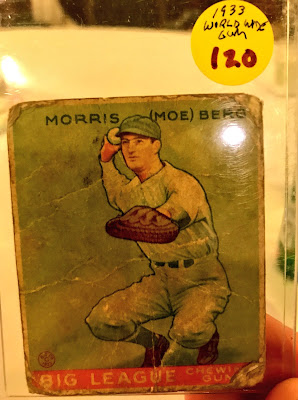 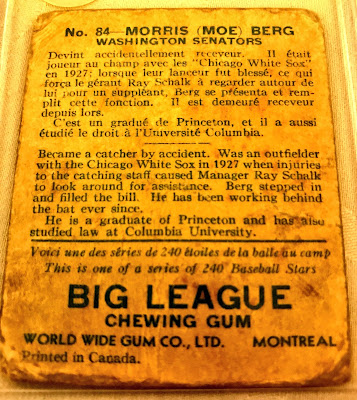 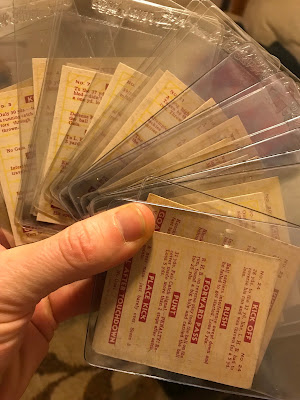 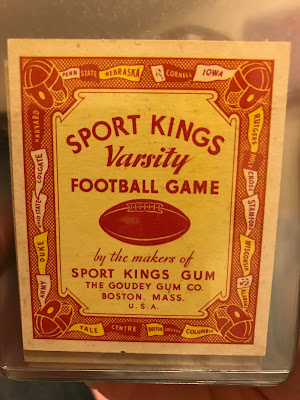 The card-flipping Varsity Football game remains hard to find at any show anywhere. Now I only need four cards to complete the game card set. Unfortunately, playing the game also required "score charts" I've never, ever seen. They'd bring to life the game situations described on card backs, probably by tracking down, distance, and time remaining. I'll make one up from scratch, if the authentic score chart search continues to prove futile.

As exception to my 1930s woes, I made five hits to this 1933 Goudey 48-card set about the Scouts themselves and a variety of nature topics. Love the art style. 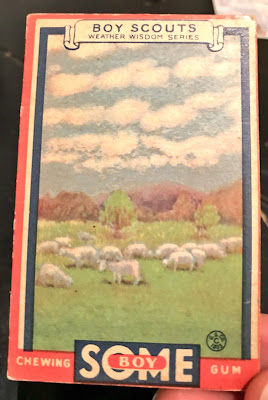 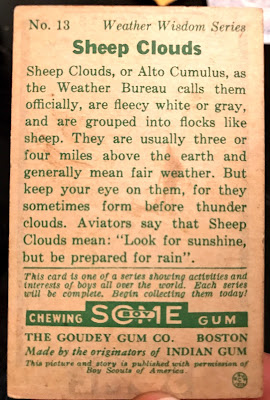 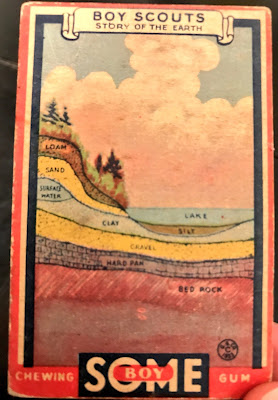 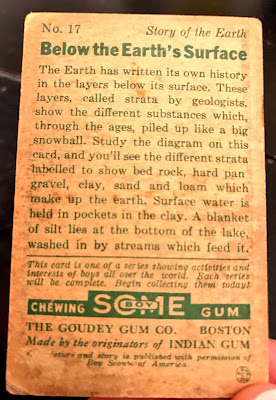 Show goal success: stocked up on 1970s Laughlin sets in earnest, including World Series, Famous Feats, and Wildest Days & Plays. Robert Laughlin's standout art almost defines "oddball baseball" in its breadth of subject matter and card stock size. Happy to find his cards for 50c and $1 throughout the show. (See my past Laughlin posts for details.)

If there's one enduring complaint I have about the National, it's that many dealers do most of their business buying & selling large lots with other National dealers, so grading and pricing for collectors becomes an afterthought. Other than Varsity Football, a $400 lot buy, my prewar sets saw limited action because things under EX had 30-50% NM book asking prices, even if tradition anchors poor ~5% and VG ~20%. I found myself back on eBay a few times during the show itself, buying cards on "real" condition pricing after seeing cloud-level show prices.

This poor-fair 1951 Topps Teams card proved an exception at $10. (I saw several other fair-good examples at the show for $30+.)

There's not a true solution to my complaint, other than being willing to shop online instead of the booths in front of you. I assume that's why sponsors bring so many autograph guests to the show: you can't replicate that in-person experience online the way you can for cards, so you don't lose those buyers to eBay.

Back to the bargain boxes


Speaking of 50c/$1 finds like the three above, watch for a bargain box themed blog giveaway later this week! It's been too long since I held one. Anyone else make it to the National and have finds to share?
Posted by Matthew Glidden

It's interesting to hear this side of it. I hadn't thought of the National being more for dealer to dealer sales versus dealer to collector.

Nice nab on the Moe Berg and all the Laughlins!

I would have to do the table-by-table technique for a show like this. I get overwhelmed too easily.

I always try the table by table method...and always break the discipline before too long!!

The Berg is definitely my favorite. There's a bunch of the 51 typos team cards on eBay now between 50-60. They all have writing on back. Great show. Next year hopefully

Holy cow. Those are some amazing pickups. I've never been to the National... and probably won't ever go unless it comes back to the West Coast. However... after seeing your $1 bin purchases, I'm starting to reconsider my travel plans next year.

Was just as surprised to see those big names in $1 bins. Must be those dealers who really think PR-FR cads should be affordable for everyone, regardless of star stature. (You can get Mantle 60s checklists in those $1 boxes, too, if you like things with his face on them.)

Cleveland / Chicago are the most consistent National show cities and I'd say Cleveland is the "closer to town" of those two. If you can go next year, I recommend it, as well as see games at Jacobs Field.