If you wrote a book about Goudey Gum's 1930s trading card sets, at least one chapter would talk about the many, many times they squeezed multiple cards from a single photo. Here's a quick look at the guy who got that treatment more than any other, George Herman (Babe) Ruth. 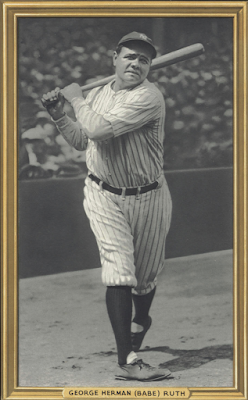 Goudey reworked this on-deck photo four times in 1933 alone, from the above R309-1 Premiums stand-up to three different cards in the main set.


That's five Babes from two photos in 1933 alone, but Goudey wasn't done. They got another card out of this pose for their 1935 4-in-1s. As with all players in that set, they're re-cropped from earlier Goudey cards. Babe's only meaningful change is "Braves."


Close to my heart is the "other" Babe Herman, #5 in Goudey's 1933 set. It's not clear if this Babe, who was also a phenomenal hitter in the 20s and 30s, picked up the nickname from his Ruthian exploits.

Why stop there? Herman got the same cropped treatment for 1935 4-in-1.


I'm surprised they didn't blot out Herman's C(hicago) cap, given the move to Pittsburgh, but it was The Great Depression and selling gum packs meant more than minor details like "current team." 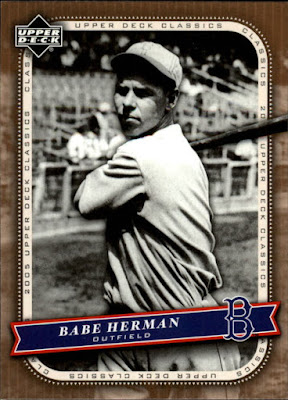 Babe's earlier days in Brooklyn included his infamous "double into a double play," explained well by the Parker Pioneer in "Three Men on Third Base."
Posted by Matthew Glidden