The paintings-over-photos look on 1951-52 Bowman stands out as some of the finest work seen on vintage cards and something not easily replicated in modern, digitally-produced sets. I could go on and on cataloging the virtues of their nearly 600 total cards, but will stick to five distinctive examples for this post. 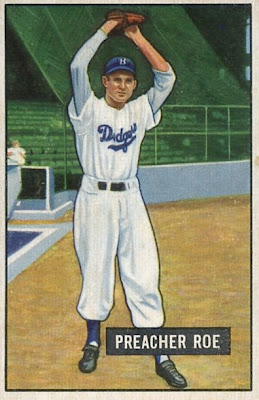 In "Hands up," Night Owl wrote about pitchers shown in a hands-above-head windup, noting it rarely appears in modern sets and wondering when pitchers changed their approach. I went back to 1951 Bowman in search of similar poses and located just two, Preacher Roe being the best. The shaded blues, bloused pants, and Ebbets Field stands make this card a classic look for Dodger fans. 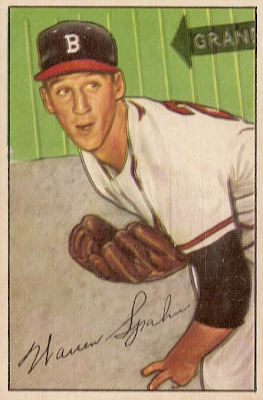 Everything about this card is fun. Boston's big B, Spahn's facial expression, the curveball release, a GRAND arrow pointing right to Warren's head. The whole look's a popcorn machine of personality. 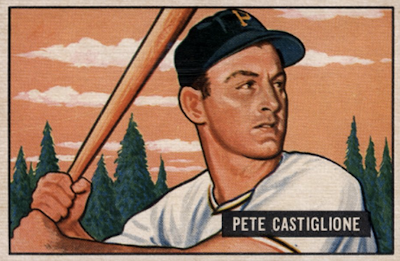 3B-SS Pete Castiglione pulled a paycheck for his defensive prowess, but you'd never know it given this mythic presentation. That orange-sky-and-evergreens backdrop gives Pete the poise of an axe handle lumberjack, felling pine timber to feed his rugged Northwestern family. 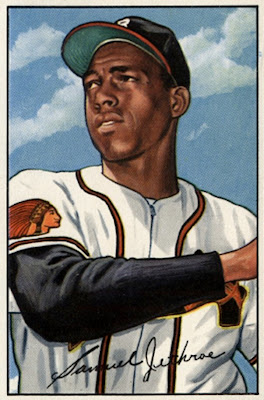 Jethroe, Jackie Robinson, and Marvin Williams first tried out for the Red Sox in 1945, two years prior to Jackie's debut. The team declined to pursue any of the trio, so their tryout became a footnote in the franchise's segregationist history. Boston's Braves, on the other hand, gave Sam his major league shot after Robinson proved a star in Brooklyn. Jethroe integrated the Braves in 1950 and, like Jackie, also won Rookie of the Year honors; he still holds the "oldest ROY" record at the (then-underreported) age of 32. This card does great work with lighting and Sam's uniform details, from its jersey zipper pull to those long sleeves. 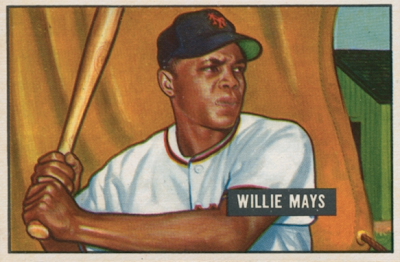 Mantle's rookie card is better-known and one of my favorites, but Mays intrigues me. Have you ever seen a tarp get center stage? It sure looks like his photographer set up behind a training field and wanted to control the light with an artificial backdrop. Instead of playing along and cropping to a tight horizontal portrait, Bowman left the canvas and shed on Willie's card. After reviewing the whole set, only #116 Bruce Edwards might be using the same backdrop--and his photo took care to make it less obvious, even scattering balls on the field as a visual distraction. Weird. Interesting. Baseball! 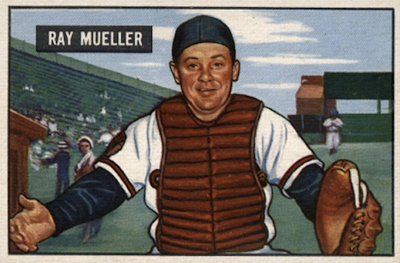 GET OVER HERE AND GIVE YOUR UNCLE RAY A HUG!
Posted by Matthew Glidden

Such a beautiful set. Love the Mays.

Another collector mentioned the "tarp" might be a Giants team flag. If so, a shame they didn't get more of it in the picture!