Following Topps Gum's purchase of former competitor Bowman in early 1956, others sought to challenge their virtual monopoly on baseball gum cards with limited success. Fleer stands out as the most dedicated, in sports card publishing (trying both baseball and football) and the court room. Decades of less-successful legal actions built to their 1975 suit for the license to show active baseball players, which a judge eventually granted, breaking Topps' exclusive deal and opening the way for the Fleer and Donruss debuts in 1981. 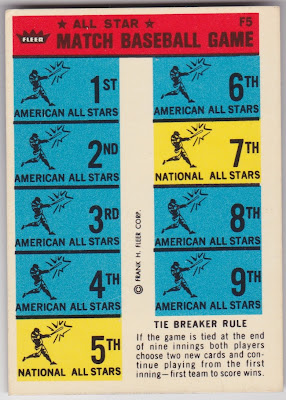 Fleer desperately wanted permission to show active players because of blasé offerings like All Star Match Baseball. An earlier Topps injunction against Fleer's 1963 set (#5 was Willie Mays) left them with faceless options in the mid-60s. No names, no teams, just "American" or "National" under a swinging right-hander and some rules to follow. These 66 cards barely count as "collectible," outside of their numbering (F1 through F66) and one major league tie-in called out on their wax wrappers. 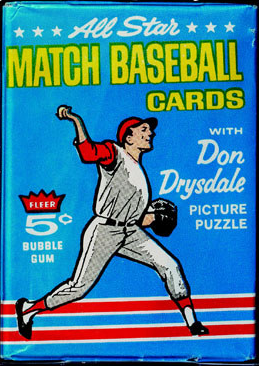 As Donruss included puzzle pieces instead of gum in the 1980s, Fleer collectors in 1966 could flip any card over for a bit of Dodgers star Don Drysdale. Pretty sure this one's his right hip. ("Who can trade me a right shoulder for this jersey swatch?") 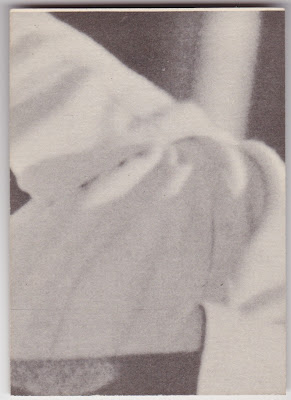 Thanks to a 2008 auction of 132-card uncut sheets, we know finishing the puzzle takes a full 66-card set. Fleer's limited 1966 production run and likely poor sales make this a challenging acquisition for modern LA or Drysdale fans.


If that pose looks familiar, a very similar version (albeit with 3/4 sleeves) showed up on 1967 Topps #55. While not an exact match, I doubt this was coincidence between competitors. 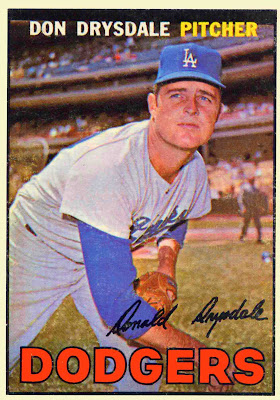