The Fleer Sticker Project already wrote the intriguing story of how Topps made Fleer wait on their own highlights set by putting out this horizontal test issue of active players doing notable things, so check it out for some cool card history. 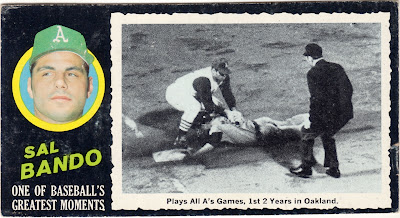 I agree Greatest Moments starts with a nice assemblage of parts, but think the whole is less than their sum. Collectors are notoriously fickle about odd-size releases and this one's tall enough that you need six-pocket pages to hold them. Also, Topps chose bland "highlights" when Sal Bando's everyday play trumps his 59 extra-base hits in 1969 during a pitching-dominant era. (His subtitle's not even correct, as Bando played partial seasons in 1966-67 before taking over as starting 3B--1968-69 weren't his "1st 2 years.") 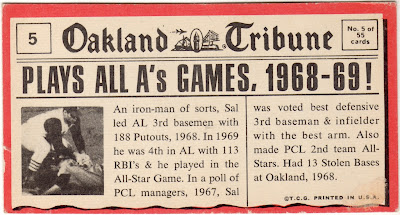 So what would have worked with collectors? Something with a standard size that highlighted specific great performances in color sounds better to me. Black-and-white photos work better as a real look into the past (instead of recent history), as Topps did with their boyhood series in 1973.

What would you put on a similar Greatest Moments set for the last few years? I'd start with Josh Hamilton's comeback and Ichiro breaking the single-season hits record. (Seattle fans take what we can get for highlights!)

Value: Sal cost $5 at a show several years ago and runs about the same now.