We're creeping ever closer to baseball's Opening Day, 2011, where everyone's tied for first and looking at a magic number of 162. (Or maybe it's 163--I'm better at scoreboard math than the real thing.) As teams trim rosters down to 25, players learn whether they'll be suiting up for San Fran's defending champion Giants...or the Flying Squirrels of Richmond, VA. 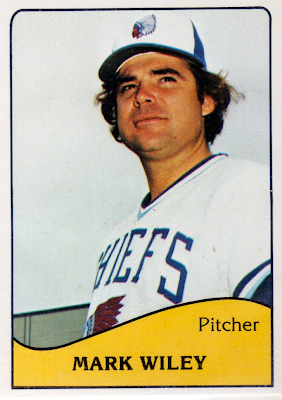 Every spring, some vets hang up their gloves and switch to coaching, usually hoping to reach the bigs again as a teacher. Mark Wiley made just such a move after 1980, trading in 11 pro seasons (2 in the majors) for pitching coach responsibilities. He most recently worked with Florida's overachieving 2009 squad, but their starting rotation suffered enough ups and downs that upper management relieved Wiley of his dugout duties and made him a special assistant. ("Mark Wiley philosophical about dismissal.") 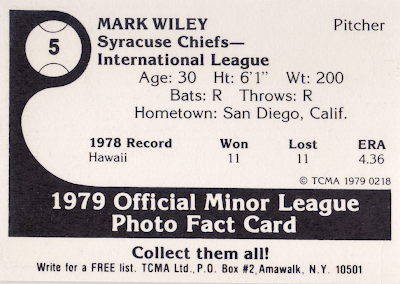 Following that 11-11 season in Hawaii, San Diego traded Mark to Toronto--MLB parent of Syracuse--for Andy Dyes, star of 1979 TCMA Islanders #5. Dyes and his rainbow towel definitely got the better card picture out of it.